BTCUSD is breaking below its ascending trend line support connecting the lows since mid-Feb. This signals a potential reversal from the previous uptrend, especially since price has also moved below the 200 SMA.

The 100 SMA is still above the longer-term 200 SMA and the gap is wide enough, but a pickup in selling pressure could lead to a downward crossover and draw even more sellers to the mix. Stochastic is on the move down but is nearing the oversold area so a pullback could be possible or a bounce back above the trend line.

RSI is also pointing down but dipping into the oversold region, which means that selling pressure is already exhausted. If bulls are able to take over, bitcoin could head up for a test of the broken support around $1200. On the other hand, continued bearish momentum could take it down to the next area of interest at $1000 then $970. 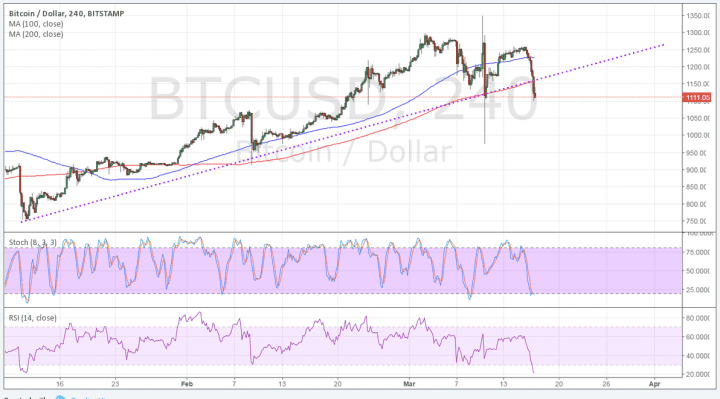 The dollar seems to be regaining its footing against bitcoin as the Fed recently hiked interest rates as expected. In addition, the tone of their statement was slightly more upbeat than before while the dot plot confirmed that three rate hikes are in the cards for the year. The US currency may have sold off on profit-taking or some degree of disappointment that the statement wasn’t too hawkish, but the longer-term demand for US assets and rising bond yields could keep it supported.

There are also several factors weighing on bitcoin these days. First is the rejection of the COIN bitcoin ETF by the SEC last week, which revealed that the regulator thought that the largely unregulated nature of bitcoin opens it to the risk of fraud and manipulation. Next is the issuance of warnings by Canada and India on bitcoin trading risks. Third is the ongoing scaling debate.

To date, industry experts have yet to agree on what to do next with bitcoin as it approaches a critical juncture. This debate has been going on for two years and the fate and reliability of the network could hinge on this decision. This has led to talks of a potential hard fork in the network, which could undermine its stability. After all, the creation of larger blocks with increased capacity could lead to a dramatic reduction in price. The lack of a viable alternative solution brings bitcoin closer to this hard fork, keeping investors wary.

Lastly, bitcoin is also being bogged down by the idea of increased regulation in China, which is its largest market. This could significantly dampen liquidity as investors would be on edge about being investigated by the government or being subject to penalties.