Bitcoin seems to have made a convincing break above the symmetrical triangle consolidation pattern and has climbed to $1230. Price could be gearing up for a pullback from here and applying the Fib tool on the breakout move shows that the 61.8% level lines up with the broken triangle resistance at the key $1200 mark.

RSI is turning lower to suggest that sellers are taking over while buyers take a break. Stochastic is also on the move down so bitcoin might follow suit. A bounce off the 61.8% Fib could lead to a climb back to the previous highs and beyond. A larger pullback could last until the 100 SMA dynamic inflection point, which is safely above the longer-term 200 SMA and indicating that the path of least resistance is to the upside.

However, if price continues to drop on stronger selling pressure, BTCUSD could make a test of the 200 SMA dynamic support at the $1170 area next. A break below this area could lead to a move all the way down to the major psychological support at $1000. 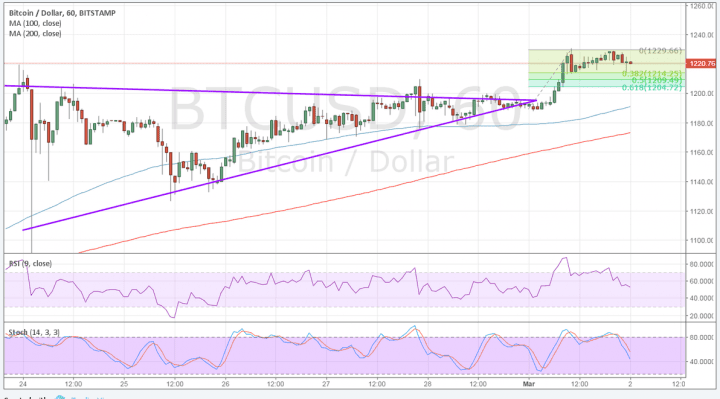 Market developments suggest further upside for BTCUSD, though, as the COIN ETF approval is looming. Analysts are pricing in only 10-25% odds of approval so there’s significant short interest, but the potential rally on an upside surprise could be sustained. Having a bitcoin ETF available on Wall Street would make the cryptocurrency more accessible for individual and institutional investors, which would translate to higher market liquidity and volatility. Aside from that, it could encourage more bitcoin funds and products to thrive, which would be bullish for bitcoin.

Dollar demand is expected to pick up again, though, as traders have chosen to see the positives on Trump’s speech in front of Congress even though it was lacking in several details. Apart from that, the FOMC is moving closer towards hiking rates in their policy meeting later this month and it all hinges to upcoming jobs and inflation reports to support this move. So far, most policymakers have been confirming the need to tighten soon and that three rate hikes are possible this 2017.

As always, traders are also on the lookout for any regulation announcements from China but no news has been good news. It has been a couple of weeks since authorities have conducted investigations on exchanges and clients and there have been no reports of penalties so far. Also data from China has been mostly upbeat for February so it looks like officials are not too worried about offshore investment or yuan speculative trading just yet.

In the meantime, geopolitical risks in Europe continue to keep the cryptocurrency supported as investors are seeking higher returns even in economic uncertainty. Election news in France and Italy, debt troubles in Greece and Italy, and Scottish referendum talks are currently dampening European market gains at the moment.