Bitcoin recently broke below an ascending channel visible on the 4-hour and daily charts. Price also fell below the $1100 area of interest, confirming that bearish pressures has gotten stronger and may be here to stay.

However, bitcoin bounced off the $940 area and seems to be pulling back from its dive. Applying the Fibs on the latest swing high and low on the 4-hour time frame reveals that the 61.8% level is closest to the broken uptrend line while the 50% Fib coincides with the broken $1100 support zone. For now, though, the 38.2% Fib also appears to be holding as near-term resistance.

The 100 SMA is still above the longer-term 200 SMA on this time frame but the gap is narrowing so a downward crossover is looming. If this is completed, more sellers could join the mix and strengthen bearish pressure. These moving averages are also close to the broken channel support, possibly adding to its strength as resistance if tested.

Stochastic is heading north so bitcoin could follow suit. RSI is also pulling up from the oversold region to show that buyers are gaining the upper hand. In that case, the correction could carry on for a bit longer before the longer-term drop resumes. However, if bitcoin manages to climb back above the trend line, the uptrend could still come into play. 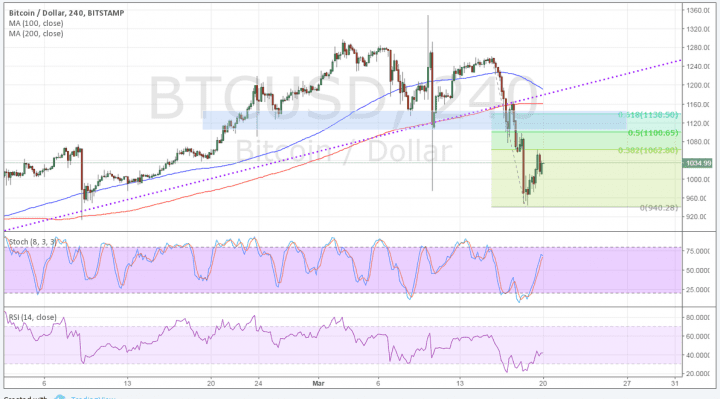 Bitcoin has been weighed down by a lot of setbacks recently. For one, there’s the resurfacing doubt on the credibility of the cryptocurrency as a store of value and investment, prompted by the SEC’s statement on rejecting the COIN ETF approval. The regulator stated that bitcoin is mostly unregulated in other markets where it is traded, opening a huge possibility for fraud and manipulation that would not be in the best interest of industry players and clients.

Meanwhile, ongoing debates on the bitcoin hard fork are also casting doubt on the network’s stability. There are pros and cons to each side, but the fact that the debate hasn’t been settled yet and no concrete action has been decided is concerning for some investors. On the other hand, the dollar could stay supported as the Fed recently hiked interest rates.

Although USD initially had a bearish reaction to the not-so-hawkish statement, the fact remains that the central bank is foreseeing stronger growth and inflation down the line. Their forecast of rate hikes for the year is still around two to three, and fiscal policy changes from the Trump administration could also provide another boost to economic performance.

Speaking of Trump, the US President has a speech scheduled in today’s US session so volatility could be expected. There’s not much in the way of market reports from the US this week but there are several top-tier catalysts that could influence overall market sentiment and therefore bitcoin demand.