Bitcoin seems to be completing its corrective wave after the previous sharp drop and could form a head and shoulders pattern. Price is testing the broken support at the rising trend line since mid-February and technical indicators are showing that the selloff will resume.

The 100 SMA has closed the gap with the 200 SMA and is ready to cross lower. If this is completed, more sellers could join in and push price back down to the previous lows around $950. This would complete the right shoulder of the reversal pattern, and a break below the neckline at $950 could set off more losses for bitcoin.

In particular, since the chart pattern spans $950-1350, the breakdown could last by $400 as well. Stochastic is already indicating overbought conditions and has formed higher highs while price made lower highs, creating a bearish divergence. RSI is also turning lower to indicate a return in selling pressure so bitcoin could also follow suit. A larger pullback could still last until the moving averages dynamic resistance at $1150, which might be the line in the sand for this correction. 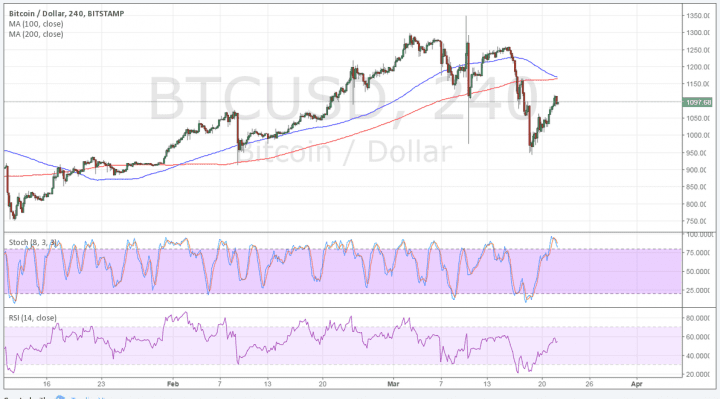 Concerns about the looming bitcoin hard fork are weighing on the cryptocurrency at the moment as many are worried that the newer version of the software could gain control of the network and render older versions incompatible. This could erode the value of existing bitcoin holdings so brokers are also warning their clients of the potential risks involved.

In particular, payments startup Circle already warned its customers that there may be negative consequences to the bitcoin hard fork so they might want to think about liquidating their holdings. Once more investors do so, bitcoin could slip as the hard fork approaches.

“This bitcoin downtime will likely occur immediately upon a ‘fork’ of bitcoin with little to no warning, and during this period of bitcoin downtime you will not have access to bitcoin that you hold in your Circle account,” the startup wrote. “The only way to avoid the potential negative consequences of a bitcoin fork is to not hold bitcoin. Just go to Settings > Currency and convert your balance to dollars, pounds or euro (availability is based on where you live). You’ll then be able to hold those funds with Circle or cash out instantly.”

This so-called breakup was confirmed last week when marketplaces acknowledged that scalability should be addressed. The proposed spinoff called Bitcoin Unlimited is contingent on updating bitcoin to support many small transactions while Bitcoin Core maintains grounded in smaller transactions, fewer changes, and better stability.