Bitcoin is back in consolidation and is trading in a symmetrical triangle pattern, currently testing support. A bounce off this area could lead to a test of resistance at the $1050 level near the 200 SMA.

Speaking of moving averages, the 100 SMA is below the longer-term 200 SMA so the path of least resistance is to the downside. The 100 SMA is around the middle of the triangle so it could hold as near-term resistance as well.

Stochastic is indicating oversold conditions and is starting to turn higher, which could draw buyers to the game. In that case, a move back to the resistance could be supported. Also, RSI is turning higher to reflect a pickup in buying pressure as well.

A break below support could give more energy to bears, probably taking bitcoin price to the next lows at $950. On the other hand, a move past the triangle resistance could spur a test of the $1100 mark or a climb to $1200 next. 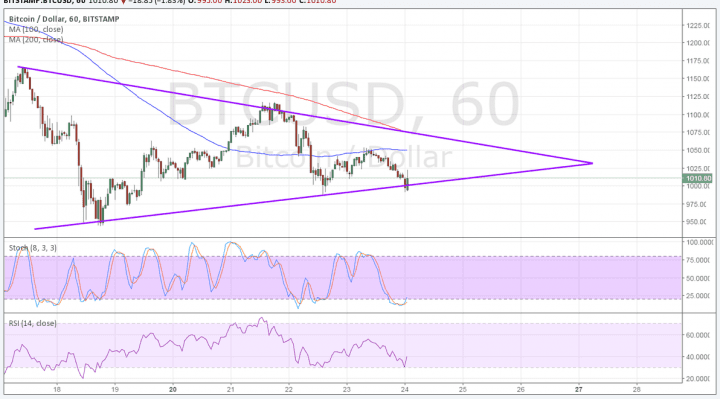 Bitcoin price is being pushed and pulled in opposite directions by a couple of factors. For one, there’s the looming hard fork that analysts fear might render old bitcoin invalid. However, this debate has been going on for years and it may be up to the network to decide which version of the bitcoin software it would honor. Either way, investors are spooked by this risk and continue to liquidate their holdings, staying wary that bitcoin might completely lose its value at some point.

On the other hand, the dollar is also being weighed down by recent headlines. As it turned out, Congress delayed its vote on the healthcare bill, an event that was seen to be a test of the Trump administration’s strength in terms of pushing its agenda to lawmakers. The delay is also casting some doubt that the White House can enact reforms on taxes and financial deregulation, two of the biggest expectations that have shored up US markets in the past few months.

Some say that the vote could still push through today but GOP leaders seem less inclined to rush things, knowing that they don’t have enough votes to secure a simple majority. According to the Freedom Caucus, they cannot support the bill in its current form since they are asking for a broader repeal of Obamacare. Either way, further delays could cast more doubts on the Trump administration and force US assets, including the dollar, to return its recent gains.

In terms of economic data, the numbers have been mixed for the US but fundamentals continue to support more Fed rate hikes this year. For now, though, political drama is hogging the spotlight and a vote of confidence for the Trump leadership might be what the dollar needs to rally or break higher against bitcoin.