Bitcoin is still in a downtrend, moving inside a descending channel formation on its 1-hour chart. Price just bounced off support and is on track towards testing the resistance around the Fib levels.

The 100 SMA is below the longer-term 200 SMA so the path of least resistance is to the downside. The gap seems to be growing to indicate a pickup in bearish pressure. If the selloff resumes at this point, bitcoin could slide back to the channel support around $850 or at least until the swing low at $885. 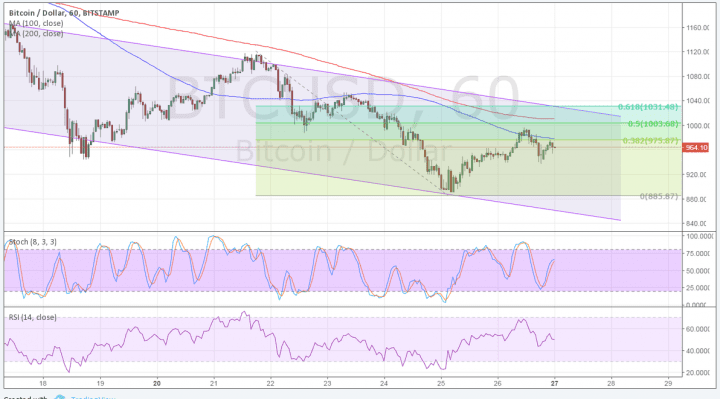 Stochastic is on the move up to suggest that buyers are in control of bitcoin at the moment and could still keep the correction in play. The selloff could resume once this oscillator hits the overbought zone and turns lower. Meanwhile, RSI is on the move down so bitcoin could already follow suit.

Dollar demand has significantly weakened at the end of the previous week as Congress failed to repeal Obamacare. This signals that the Trump administration could have a tough time pushing its agenda to lawmakers, telling market watchers that it may take longer for tax reform and financial deregulation to be implemented.

This could also have an impact on Fed policy as a number of central bank officials have priced in the idea of fiscal stimulus in their forecasts. If they downplay growth expectations on likely delays in reforms promised by the White House, traders could doubt that they’d be on track towards hiking rates three times this year. Analysts are already pricing in weaker odds of a June hike and are setting their sights on September instead.

However, bitcoin also faces some downside pressure on the network’s hard fork, with many still worried that a new version of the software could overtake the majority and cause old bitcoin to be invalid. This has led to a lot of profit-taking in the past weeks, bolstering other cryptocurrencies in the process.

Still, the foreseen uncertainty surrounding Article 50 when it comes to Brexit could keep traders holding on to bitcoin as an alternative investment in case European markets tumble. Prime Minister May has confirmed that they will start the negotiations process by March 29 and the European Council has promised a swift reply.