BTCUSD is currently testing the top of the descending channel on its longer-term time frames, which coincides with the channel resistance on the 15-minute chart. Price could be due for a quick selloff to the bottom of the short-term rising channel or all the way down to the longer-term support below $900.

However, the 100 SMA is above the longer-term 200 SMA on this chart so the path of least resistance is to the upside. Also the 200 SMA lines up with the rising channel support around $980, adding to its potential strength as a floor. In that case, bitcoin could make another test of the smaller channel resistance and eventually break past the longer-term channel top at $1040.

Stochastic is pulling up to indicate that a pickup in bullish momentum is happening. On the other hand, RSI is turning lower to indicate that sellers are still in control of BTCUSD action. A break below the short-term support could lead to a move to the longer-term channel bottom closer to $850 or at least until the previous lows. 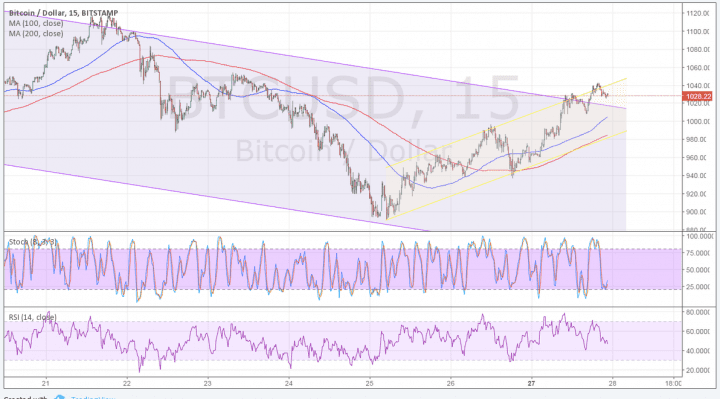 Dollar weakness has been in play for the past few days as Congress failed to repeal Obamacare, signaling that the Trump administration won’t have such an easy time enacting reforms and fiscal policy changes. This puts the tax reform at risk, something that markets had been banking on since the elections and Trump’s inauguration.

If these tax cuts are pushed back, business and consumer confidence could take a hit and weigh on investing and spending activity. This could dampen growth prospects and lead the Fed to push back its rate hike time line. So far, though, FOMC policymakers continue to highlight the improvements in hiring and inflation.

As for bitcoin, its downside factors from the network hard fork could come into play sooner or later. Exchanges and payment services providers continue to warn their clients of the risks involved and potential incompatibilities that could arise. After all, a newer version of the software risks overtaking the old one and possibly rendering other bitcoin invalid.

Then again, BTCUSD is currently drawing support from the looming uncertainty surrounding Brexit. Article 50 is set to be invoked by the UK government this week and the EU has promised to respond swiftly, with the tone of their official statement likely to set the mood for the negotiations process. Any hint of hostility could bring risk aversion back to the markets and trigger more gains for bitcoin as traders seek higher returns.