BTCUSD continues to trend higher and is testing all-time highs once more, closing in on the $1300 mark. Price broke past its ascending channel resistance at $1250, signaling that stronger bullish pressure is present. Price is even forming a bullish flag pattern, signaling potential continuation.

The 100 SMA is above the longer-term 200 SMA, confirming that the path of least resistance is to the upside. In the event of a pullback or selloff, bitcoin could still find support at the channel bottom in line with the 100 SMA dynamic support near $1150. A larger drop could bounce off the 200 SMA at $1050. The gap between the moving averages seems to be widening, reflecting stronger buying momentum.

However, RSI is turning lower from the overbought zone to suggest that sellers might take control of price action while bulls book profits. Stochastic also seems to be heading south at this point, allowing a correction to take place. Near-term support is located at $1200 as well so BTCUSD might bounce off this area. 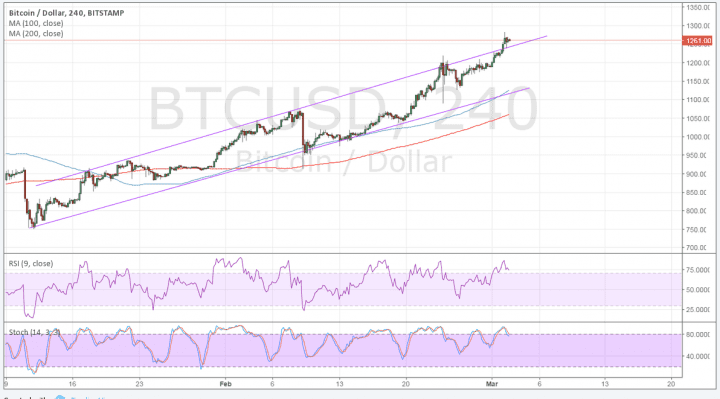 Expectations continue to run high for the COIN ETF approval by the SEC a few days from now, even as several analysts have priced in low odds of the fund getting the green light. Still, an upside surprise could mean a big rally for the cryptocurrency since an ETF would make it more available to investors, both individual and institutional.

Traders appear to be treading carefully, though, as China could announce stricter regulations or penalties for bitcoin clients anytime. Recall that the largest market of bitcoin encountered a few headwinds early in the year when authorities started cracking down on exchanges and leading them to introduce higher transactions costs to keep activity in check or to cease offering margin bitcoin accounts to reduce risk exposure. The latest updates featured some exchanges halting client withdrawals temporarily while officials investigate for money laundering operations.

Meanwhile, geopolitical risks and uncertainties all over the globe continue to keep bitcoin price supported. For one, Greece is rumored to be seeking financial aid from the World Bank as it faces dire chances of getting the next tranche of bailout funds from the IMF and its other creditors. Not much details have been shared yet but this does show that the debt-ridden country is running out of options and may risk default.

Although the dollar has also benefitted from the pickup in risk aversion, it has paled in comparison to bitcoin, which is now surpassing the value of gold per ounce. The recent rally is also being attributed to a revival in demand from China as investors are becoming more confident that the government won’t ban cryptocurrency trading anytime soon. A foreseen selloff in Venezuela also contributed to the climb.