Bitcoin is starting to break above the descending trend channel on the 4-hour time frame, indicating that a reversal is in the cards. Price is also moving above the resistance of a short-term symmetrical triangle, which can also be interpreted as a bullish flag or continuation pattern.

The 100 SMA is below the longer-term 200 SMA on this time frame so the path of least resistance is to the downside. In addition, the nearby 100 SMA could hold as dynamic resistance and keep gains in check, pushing bitcoin back below the channel resistance and on track towards testing support around $850. The gap between the moving averages is still wide, confirming that bearish pressure is in play, and no signs of an upward crossover are showing up yet.

Stochastic is turning higher to confirm that buyers are taking control of price action. This could be enough to sustain the climb up to the next potential resistance at $1100 then at the 200 SMA dynamic inflection point near $1125. RSI is still on middle ground so ranging conditions could return and keep bitcoin moving back and forth between support at $1000 and resistance at $1050. 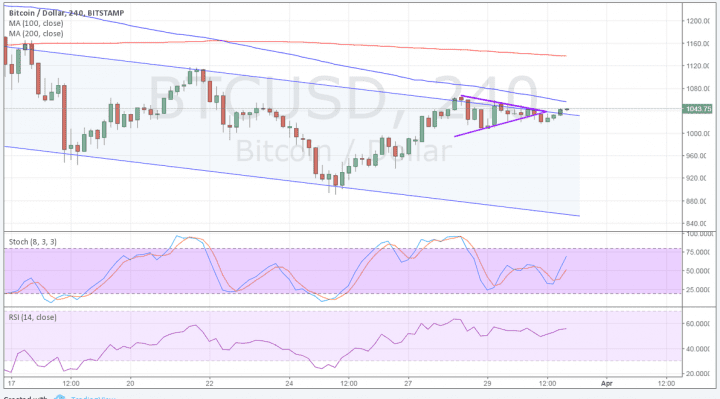 News reports are showing more and more bitcoin exchanges and platforms rejecting Bitcoin Unlimited, which is the newer version of the software, in favor of SegWit. Recall that scalability issues have forced the network to a hard fork, and inconsistencies could arise if the consensus honors a different version, possibly rendering old bitcoin invalid.

The cryptocurrency has shed a lot of ground in the past few weeks on these concerns, on top of the rejection of another bitcoin ETF by the SEC on the grounds that the underlying security is unregulated in other markets and that it could have a high risk of fraud or manipulation. However, investors seem to be regaining confidence that bitcoin can emerge from this hard fork with a much more stable system.

Meanwhile, the US dollar has rebounded against its forex peers but remains weaker to bitcoin. Traders still have some degree of doubt that the Trump administration can enact its reform agenda and fiscal policy changes right away, especially since the US President seems to have shifted his focus to penalizing currency manipulators. Still, it’s worth noting that the US GDP reading was upgraded from 2.0% to 2.1% versus the projected dip to 1.9%.

Note that we are approaching the end of the week, month, and quarter so there could be plenty of profit-taking activity in financial markets as traders liquidate their holdings to crunch the numbers on their performance. With that, there could be a chance for a reversal or a large dip from the current moves.