Bitcoin is trending higher but seems to be in the middle of a correction from its latest rally at the moment. Applying the Fib tool on the latest swing low and high on the 1-hour chart shows that the 61.8% retracement level lines up with an area of interest at $1200.

The 100 SMA is above the 200 SMA on this time frame so the path of least resistance is to the upside. This means that the rally is more likely to continue than to reverse. Also, the gap between the moving averages is widening to reflect stronger bullish momentum. The 100 SMA appears to be holding as dynamic support at the moment and might be enough to keep losses in check. However, a larger pullback could still last until the longer-term 200 SMA closer to the 50% Fibonacci retracement level.

RSI is turning lower to show that sellers are still in control of price action at the moment, confirming that the correction could stay in play until bitcoin reaches a strong bullish area of interest. Stochastic is also making its way down from the overbought zone to indicate that buyers are taking a break and letting sellers take over in the meantime. Once both oscillators hit the oversold area and turn higher, buying pressure could return. 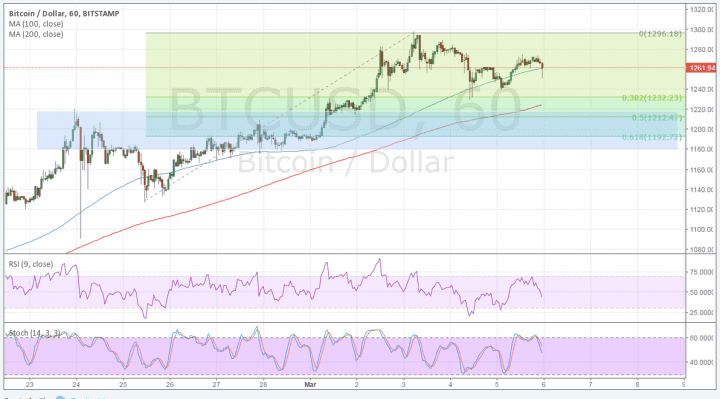 Bitcoin bulls seem to be slowly cashing in on their earlier long positions with this week’s event risk. For one, traders are looking out for the SEC approval for the COIN bitcoin ETF on March 10 and any negative feedback could mean losses for bitcoin. As always, any news of regulation from China or penalties to money laundering bitcoin clients could also drag the cryptocurrency down.

Still, any positive updates particularly with the COIN ETF could mean tremendous upside for bitcoin since it would increase market liquidity and interest by making bitcoin more accessible to individuals and institutions. This could also encourage more firms to come up with bitcoin ETFs or other types of securities.

Another potential risk is the NFP report at the end of the week since this might seal the deal for a March Fed rate hike. Last Friday, FOMC policymakers reiterated their bias for hiking interest rates in their meeting this month but clarified that this hinges on whether or not employment and inflation stays on track towards achieving their goals.

Analysts are expecting to see weaker jobs growth of 185K in February versus the previous 227K increase but an upside surprise could mean more dollar gains. Note that February has fewer days compared to other months so dollar traders are adjusting their expectations for this report and that anything above 200K could spur a strong dollar rally versus bitcoin.