BTCUSD seems to be having trouble pushing past the $1300 handle and might need to make a correction. Applying the Fib tool on the swing high and low on the daily time frame shows that the 61.8% retracement level lines up with an area of interest at the $1070 level, at which point several bulls might be waiting.

However, it’s also worth noting that bitcoin has formed  bit of a bullish continuation pattern and that a candle closing past $1300 would be enough to confirm that a steeper climb is underway. After all, the 100 SMA is safely above the longer-term 200 SMA on this time frame and the gap between the moving averages is widening to reflect stronger bullish momentum.

Stochastic is already indicating overbought conditions, though, which means that buyers are exhausted at this point and may be willing to let sellers take over. RSI is also turning lower, suggesting that a selloff could be in the cards. A shallow pullback from the rally could last until the $1200 major psychological level which has also held as an area of interest in the recent climb. A larger dip could last until the $1100 mark or 50% retracement level. 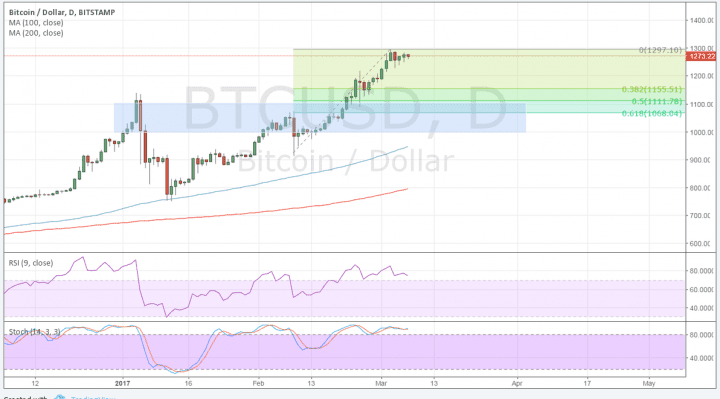 Traders are sitting on the edge of their seats awaiting the COIN bitcoin ETF approval by the SEC. This has contributed to a lot of consolidation and a bit of profit-taking, as investors pare their exposure to any event risks. If it pushes through, market liquidity and interest could pick up significantly, sealing in more gains for bitcoin. Aside from that, approval could also encourage more companies to come up with financial products based on cryptocurrencies.

Another potential risk for BTCUSD is the upcoming NFP release. Although most traders are already positioning for a Fed interest rate hike during their policy meeting later this month, the jobs report could still make or break these expectations. Analysts are expecting to see a 188K increase in hiring versus the earlier 227K pickup and the average hourly earnings figure could also have some clues on how inflationary pressures might turn out.

Still, most Fed officials have expressed the view that they should tighten sooner rather than later. Even FOMC head Yellen noted that waiting too long to hike could do more harm to the economy than good, but she also clarified that upcoming data would need to show more signs of progress towards achieving their employment and inflation targets before they pull the trigger.

As always, bitcoin action remains wary of potential action from Chinese authorities as this marks the third week without any regulatory news. Earlier in the year, officials have been busy cracking down on money laundering activity and offshore investment linked to bitcoin, causing sharp drops here and there.