Bitcoin price enjoyed a bout of volatility recently as price sold off sharply but found support at $1200. This happens to be a long-term area of interest, which explains why plenty of buy orders are waiting in that area. So far, bulls are still trying to defend this level but sellers are also trying harder.

The 100 SMA is still above the longer-term 200 SMA on the 1-hour chart so the path of least resistance is to the upside. However, the gap between the moving averages is narrowing so a downward crossover might be looming, possibly drawing more sellers to the mix. In that case, a break below the descending channel formation could take place.

RSI is on the move up, though, which means that buyers are trying to stay on top of their game. Stochastic is heading south so bitcoin price could follow suit but the oscillator is nearing the oversold region and may be ready to turn higher as well. In addition, the latest hourly candle looks like a spinning top. If the next candle closes above the high around $1225, a short-term climb to the resistance at $1260 or the 100 SMA dynamic inflection point could take place. 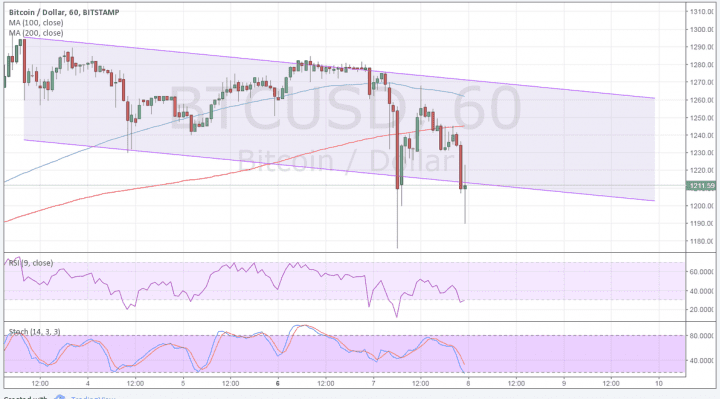 Zooming out to longer-term charts shows that the uptrend is still intact but that BTCUSD is approaching a critical inflection point around $1100-1150. A break below this area could seal the deal for a longer-term selloff but a bounce could take it back up to the recent highs and beyond eventually.

The US dollar is soaring across the board on Fed rate hike expectations for March, thanks to mostly hawkish remarks from FOMC members last Friday and relatively upbeat data. Even though the headline trade balance showed a wider deficit, components indicated that both imports and exports picked up to reflect strong domestic and external demand.

The upcoming NFP release on Friday could be a big catalyst for dollar-denominated assets, including BTCUSD. Analysts are projecting a 188K increase in employment, which would be slower compared to the previous 227K gain. Still, a stronger than expected figure could strengthen Fed rate hike expectations and lead to more gains for the dollar. On the other hand, a disappointing read could mean both dollar weakness and a pickup in risk appetite, which would favor bitcoin.

The SEC decision on the bitcoin COIN ETF is closing in and traders seem to be booking profits off their earlier long positions ahead of this major announcement. Not only would it drastically increase market interest and liquidity, but it might also encourage more firms to construct securities based on bitcoin. Analysts are projecting higher odds of approval, with some saying around 50%, compared to their earlier forecasts at the low 10s.