Bitcoin could be due for a major correction, either to the shorter-term rising trend line connecting the lows since September or to the longer-term one that’s been holding since October 2015. Applying the Fib tool on the swing high and low on the daily time frame shows that the 61.8% level lines up with the near-term trend line and the 100 SMA dynamic support.

A shallow pullback could find support at the 38.2% retracement level at $1100, which is also around the previous spike higher. However, a major correction could last until the purple trend line at $800 and the 200 SMA. The 100 SMA is above the 200 SMA on this time frame so the path of least resistance is to the upside, which means that the uptrend could resume sooner or later.

RSI is heading south, which means that sellers are in control of price action. This could keep the correction in play until the oscillator reaches the oversold region and turns higher. Stochastic is also turning lower from the overbought zone and is just halfway through, which means that there’s a significant amount of bearish pressure left. 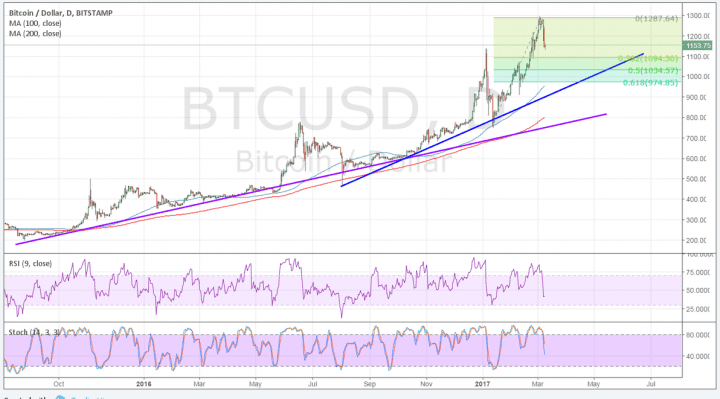 Dollar strength has been mostly to blame for the drop in BTCUSD these days as the Fed is moving closer to hiking interest rates. The US central bank has a monetary policy meeting next week and expectations are running high for a tightening announcement, especially since recent reports have been indicative of progress.

In particular, the February ADP non-farm employment change reading showed a 298K gain versus the projected 185K rise. Aside from that, the January reading enjoyed an upgrade, leading market watchers to predict that the NFP might have the same results. In that case, Fed rate hike expectations could increase once more and lead to more dollar gains. On the other hand, disappointing headline figures and a reduction in average hourly earnings could mean losses for the dollar and a bounce for BTCUSD.

Another event risk for bitcoin is the SEC decision on the COIN bitcoin ETF application by the Winklevoss twins. This could have a lot of implications on the future of the cryptocurrency, as approval would drastically increase market liquidity and interest. It could also encourage other ETFs to be formed in order to make bitcoin more accessible to individual and institutional investors. Rejection could lead to a deeper pullback for BTCUSD as more traders book profits off their earlier long positions.