Bitcoin keeps pushing higher, moving inside a long-term channel on its daily chart and on an ascending trend line on its short-term time frames. Price just bounced off the trend line support recently and could be aiming for the top of the channel around $1450 from here.

The 100 SMA is above the longer-term 200 SMA on the 4-hour chart so the path of least resistance is to the upside. However, the gap between the moving averages is narrowing to suggest weakening buying pressure.

At the same time, stochastic is dipping into the overbought territory to signal that buyers are getting tired. Once the oscillator turns lower, bearish pressure could return and push bitcoin back to the trend line support or for a larger correction to the dynamic support around the moving averages.

RSI has been on its way down but appears to be turning back up to show that buyers are putting up a fight. If the oscillator turns back down again, sellers could regain control and push for a pullback to $1350. 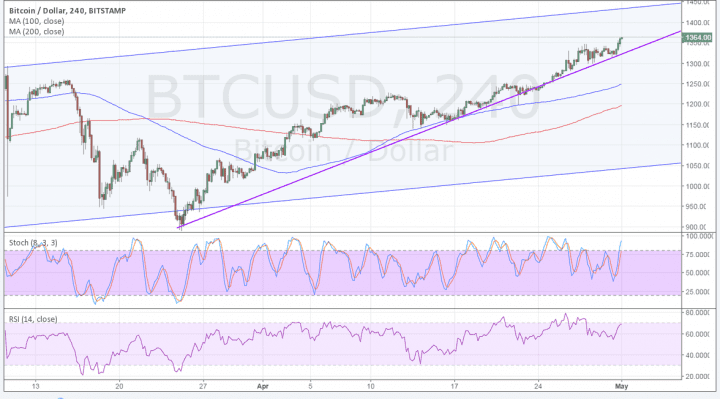 Economic data from the US turned out weaker than expected on Friday as the advance GDP report churned out a meager 0.7% growth figure versus the estimated 1.3% expansion. This is also much weaker than the earlier 2.1% growth figure, casting doubt on the Fed’s ability to hike interest rates at least two more times this year.

Meanwhile, bitcoin bulls continue to charge on revived hopes that the SEC could grant approval to the Winklevoss COIN ETF. Recall that expectations for increased market interest and liquidity shored up bitcoin price earlier in the year but most of the gains were returned when the regulator turned the application down.

Keep in mind that one of the main reasons for denial was that bitcoin is traded in mostly unregulated markets, opening up a huge exposure to potential fraud and manipulation. However, there has been some progress in regulating the cryptocurrency in the likes of Japan so investors are hopeful that other authorities could follow suit and therefore increase credibility in bitcoin.