Bitcoin soared to new record highs once more, signaling that bullish momentum continues to pick up. If you are looking for a chance to catch this rally, a correction is going on at the moment and the $1600 area could be the buy area to watch.

Applying the Fibonacci retracement tool on the latest swing low and high on the 1-hour chart shows that the 61.8% level lines up with the ascending trend line connecting the lows for the past few days. This also coincides with a former resistance level which might now hold as support.

It also lines up with the 100 SMA dynamic support, which is above the longer-term 200 SMA to show that the path of least resistance is to the upside. If any of the Fib levels are able to keep losses in check, bitcoin could bounce back to the latest highs around $1750 or establish new ones.

Stochastic is turning down to show that bears are in control of bitcoin movement for now. Similarly, RSI is also heading south to show that bearish momentum is in play. Better wait for both oscillators to indicate oversold conditions and turn higher before going long. Also note that the gap between the moving averages is narrowing to reflect a slowdown in buying momentum. 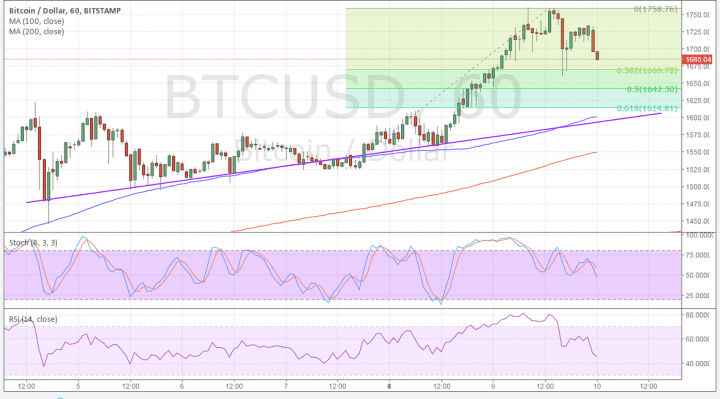 Even so, market factors remain very much in support of bitcoin at the moment as geopolitical risk is back in play. To be specific, this is stemming from provocations from North Korea regarding its sixth nuclear missile test despite warnings and threats of sanctions from other nations like the United States.

In addition, the South Korean presidential elections yielded a leader that is rumored to be a North Korean sympathizer so this could weaken the stance of the US when it comes to keeping tensions under control in the region. Although many have mentioned that the hermit nation is far from being able to launch a successful attack in the US, Asian investors worry that any missile launch could inflict harm on nearby countries.

This has sparked another strong surge in bitcoin volumes and demand, especially since Japan has recently acknowledged bitcoin as a legal form of payment and traders are getting their hopes up for SEC approval for the COIN bitcoin ETF.