Bitcoin is currently testing the top of its ascending channel on the 1-hour time frame and looks ready for another upside break. Price is also consolidating in a small rising wedge formation and a move past the resistance could be enough to confirm that a steeper climb is in the cards.

The 100 SMA is above the longer-term 200 SMA so the path of least resistance is to the upside. In other words, there’s a stronger chance that the uptrend would continue rather than reverse. Also, the 100 SMA coincides with the channel support to add to its strength as a floor in case bitcoin pulls back.

RSI is starting to turn lower to suggest that bearish pressure could return. If so, bitcoin might break below the wedge support and head straight for the area of interest around $1650-1700. A break below that level could still find support at the 200 SMA dynamic support or $1600.

Stochastic is pointing up to indicate that buyers are trying to stay in control of bitcoin price. This could be enough to spur an upside break and a move to the next psychological level at $1900. 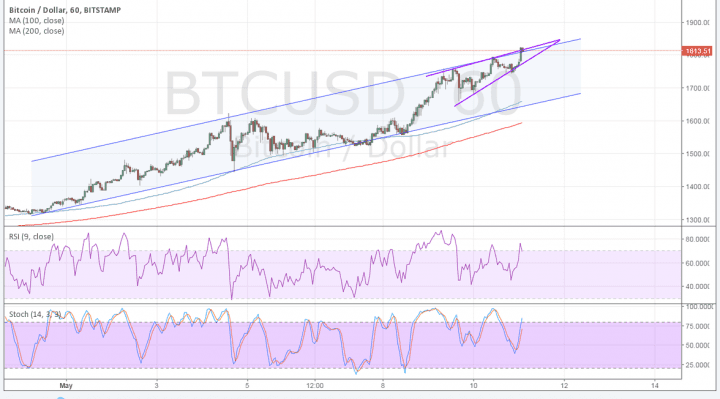 There are several factors supporting bitcoin at the moment, one of which is the anticipated approval of the bitcoin ETF by the SEC. Earlier this month, the regulator announced that the application is open for comment once again and that the Winklevoss twins have until May 15 to submit additional requirements.

This comes after Japan’s decision to accept bitcoin as a legal form of payment, which basically means that it can fall under anti-money laundering regulation. This could be enough for the US regulator to accept that bitcoin is no longer largely unregulated as Japan has been getting a larger share of the bitcoin market these days, with the pickup in volume as another reason keeping bitcoin rallies in play.

Also, the presence of geopolitical risk in the markets is drawing traders toward the higher returns in bitcoin. Right now, the focus is on Syria and North Korea and how tensions could escalate depending on US involvement. This could dampen returns in traditional markets and encourage more investors to take advantage of the bitcoin climb instead.