Bitcoin is in the middle of a major correction on its 4-hour time frame as price retreated from the $1880 highs. It is currently approaching the 38.2% Fibonacci retracement level at $1741 which might keep losses in check. This area is a short-term resistance turned support level at which several buyers might be waiting.

However, a larger pullback to the lower Fib levels might be in the cards, as these line up with a rising trend line that’s been holding since the start of the month. Support could be found at $1650 before bitcoin resumes its climb to the recent highs, but a break below these Fib levels could signal that a downtrend is taking place.

The 100 SMA is still safely above the longer-term 200 SMA on this 4-hour chart. Also, the gap between the moving averages is widening to reflect stronger buying pressure. Price is also way above these moving averages, which suggests that a downward crossover has low odds of happening.

Then again, stochastic is heading south from the overbought zone to signal that sellers are taking control of price action. RSI is also on its way down so bitcoin might follow suit. A break below the trend line support could lead to a move towards the next area of interest around $1550-1600. 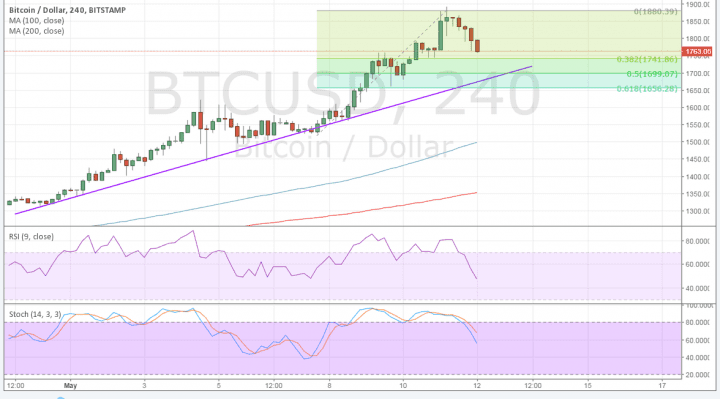 Bitcoin has taken a hit after former FBI chief Comey said that virtual currencies are making it difficult for the agency to investigate crime. This taints the legitimacy of bitcoin, which has steadily been gaining traction recently, as it reminded investors of its earlier use as a means of payment among drug dealers and terrorists.

This led some to doubt that the SEC will give the thumbs up for the bitcoin ETF application. Recall that the regulator already denied this proposal but opened it up for review again after the Japanese government passed a law that recognizes bitcoin as a legal form of payment.

To top it off, liquidity operations in China are keeping traders on edge that monetary authorities might be up to something when it comes to limiting offshore investment once more.