Bitcoin is still stuck in consolidation, making lower highs and higher lows on its 4-hour chart to create a symmetrical triangle formation. Traders are sitting on their hands and waiting for the SEC decision on the COIN bitcoin ETF, and the recent global cyberattack in which bitcoin was demanded as ransom has tainted the cryptocurrency’s credibility.

The 100 SMA is safely above the longer-term 200 SMA on the 4-hour time frame, though, indicating that the path of least resistance is still to the upside. The gap is sufficiently wide so there are low odds of a downward crossover happening anytime soon. Then again, this does not mean that a major correction is impossible.

The next area of interest is located at the $1550-1600 area, which acted as resistance in the past and coincides with the 100 SMA dynamic inflection point. This level could keep losses in check even if bitcoin breaks below the triangle support. Note, however, that the formation spans $1500-1850 so any resulting breakout could be followed by a trend of the same height.

Stochastic is heading south so bitcoin might follow suit. RSI is also on the move down so more losses could be possible. A break of the $1700 handle could be enough to confirm that a move lower is underway, and a drop below the $1500 mark could mark the start of a longer-term slide. 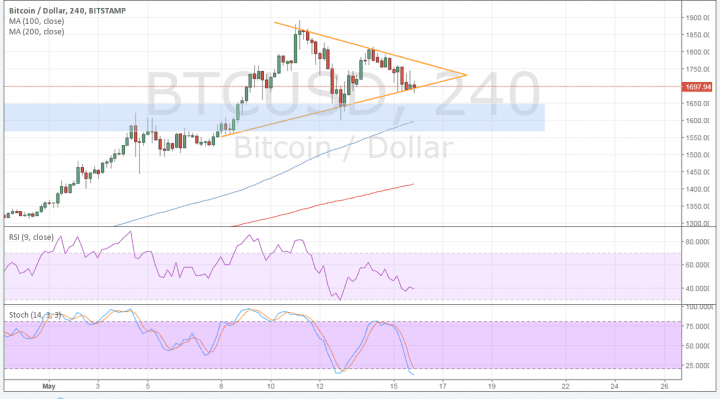 However, both oscillators are also close to oversold levels so sellers might want to take a break soon. If so, a bounce back to the triangle resistance around $1750 could take place and a break past $1800 could lead to a test of the all-time highs or the creation of new ones.

As mentioned earlier, the ransomware attack WannaCry has perpetrators demanding bitcoin payment for files that have been locked due to the virus, reminding traders and authorities of the cryptocurrency’s prevalent association with criminal activity in the past. This led to doubts that the SEC will approve the COIN application even after other governments like in Japan have acknowledged bitcoin as a legal form of payment that falls under regulation.