Bitcoin continues to bounce back and forth inside its triangle consolidation pattern visible on the 1-hour time frame. Price is testing support once more and looks ready for a bounce back to the resistance.

This consolidation has been getting tighter, which means that pressure is building up for a breakout. The 100 SMA just made a downward crossover to indicate that the path of least resistance might be to the downside but the moving averages could simply be oscillating to reflect range-bound conditions.

RSI is pointing up to show that buyers are trying to regain control of bitcoin price action. Similarly, stochastic is turning up to suggest a return in bullish pressure. A move past the resistance around $1750 could be enough to confirm an upside break and put bitcoin on track towards testing the highs at $1880 or setting new ones.

On the other hand, a break below support at $1680 could signal the start of a longer-term drop. Note that the triangle spans $1560 to $1880 so a breakout in either direction could yield a rally or a drop of the same size. 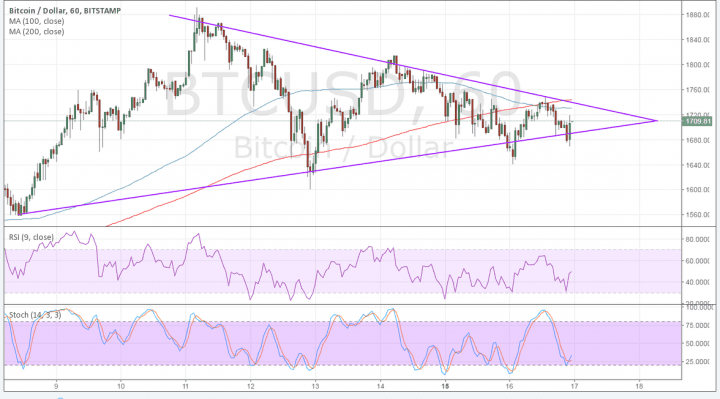 Bitcoin traders are sitting on their hands for the time being, waiting to see if the repercussions of the WannaCry ransomware attack on the cryptocurrency’s reputation is about to blow over soon. Perpetrators have demanded bitcoin as payment to unlock files they seized from victims and the payments have been rising in the past days while authorities attempt to crack down on the criminal activity.

This could serve as a make-or-break scenario for bitcoin, which has been making steady progress in building up its credibility over the past weeks. Earlier this year, the Japanese government implemented a law that recognizes bitcoin as a legal form of payment, setting a precedent for other regulators. This was followed by the SEC decision to reopen the COIN bitcoin ETF application for comment and further review.

However, the cyberattack incident represents two steps back in this progress as bitcoin still struggles to rid itself of the reputation for being used in criminal activity as it was in the past.