Bitcoin looks ready to resume the climb as price broke out of a short-term symmetrical triangle pattern. A quick correction is happening right now but market factors are in support of more gains for the cryptocurrency.

In addition, a small double bottom pattern can be seen on the 1-hour chart, also indicating that an uptrend is due. This chart pattern spans $1600-1800 so the resulting climb could be of the same size, taking bitcoin past its all-time highs. Price has yet to break past the neckline at $1825 to confirm the potential uptrend.

However, the 100 SMA is below the longer-term 200 SMA on this time frame so the path of least resistance is to the downside. This means that the selloff is more likely to persist, possibly leading to a test of the bottoms around $1650. Still, the gap between the moving averages is narrowing to suggest a potential upside crossover and a return in buying pressure. 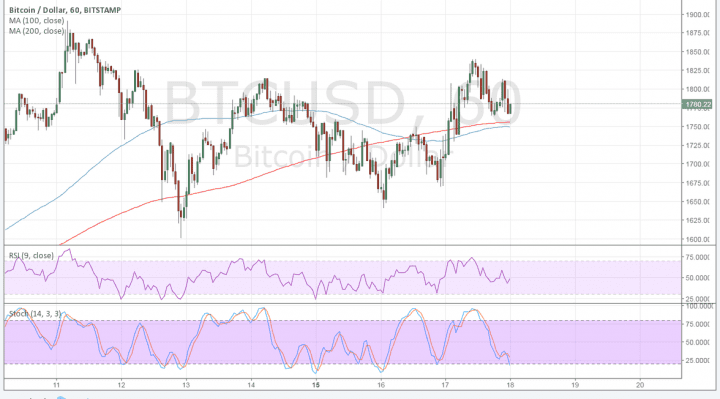 RSI is on its way down so bitcoin price might follow suit. Similarly, stochastic is heading south to reflect the presence of bearish momentum. Once both indicators hit oversold areas and turn higher, buying pressure could return and potentially lead to a strong climb.

Market attention is now shifting back to geopolitical risks as the US Justice Department ordered a probe into the alleged intelligence information leak by Trump to Russia. This news led to a spike in VIX in the latest US session, indicating a pickup in fear and uncertainty. Speculations that the tax reform and other fiscal policy changes will be delayed due to this, along with talks of potential impeachment, have weighed heavily on US markets.

Bitcoin has been able to take advantage of this flight to safety, along with other lower-yielding currencies like the yen. There’s not much in the way of top-tier reports from the US today so the spotlight could still be on what’s happening in Washington. Any indication that there was wrong-doing on behalf of the administration could keep the uncertainty trade in play and keep bitcoin supported.