Bitcoin is in the middle of setting new record highs again and applying the Fibonacci extension tool on the latest pullback action shows how high it could go next. At the moment, bitcoin is testing the 38.2% extension near the $1900 major psychological level but looks prime for a rally up to the next resistance levels.

The 100 SMA is safely above the longer-term 200 SMA on the daily time frame so the long-term uptrend is likely to stay intact. However, RSI appears to be on the move down so buyers might need to take a break at some point.

Stochastic has also turned down from the overbought zone to reflect weakening bullish pressure but the oscillator is turning higher once more to suggest that buyers are not done with the climb just yet. 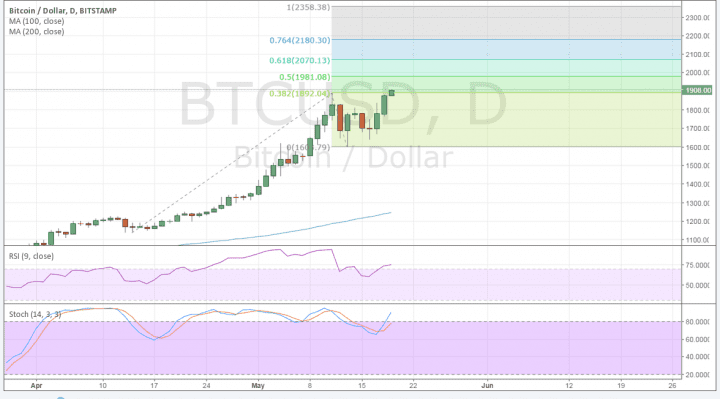 The pickup in geopolitical risk and uncertainty has once again proven to be positive for bitcoin, as traders moving their money out of traditional financial markets like stocks and commodities are likely seeking higher returns on alternative assets like bitcoin and other digital currencies.

In particular, the whole issue about Trump’s alleged leak of highly-classified intelligence information to Russian officials has thrown the US market into a frenzy, with equity indices chalking up their steepest one-day declines on Wednesday then making a bit of a recovery the following day. As it turned out, former FBI director Comey reportedly didn’t get any pressure from government officials to halt investigations on Russia.

However, the lack of top-tier data from the US today could keep the focus squarely on the Russian leak probe and its repercussions on the Trump administration, not to mention the US economy. Market watchers have already been buzzing about a potential impeachment or at least significant delays in tax reform, which could continue to keep a lid on dollar gains versus bitcoin.