Bitcoin continues to keep climbing and has recently bounced off the rising trend line support on its 1-hour chart. Price appears to be stalling around $1425 and might be due for a pullback from here.

Applying the Fibonacci retracement tool on the latest swing high and low on this time frame shows that the 61.8% level lines up with the rising trend line around $1360. It also coincides with the 100 SMA dynamic support.

The 100 SMA is above the longer-term 200 SMA on the 1-hour chart so the path of least resistance is to the upside. A larger pullback could still last until the 200 SMA dynamic inflection point but this might be the line in the sand for the uptrend. In other words, a break below the 200 SMA could be an early indication of a reversal. 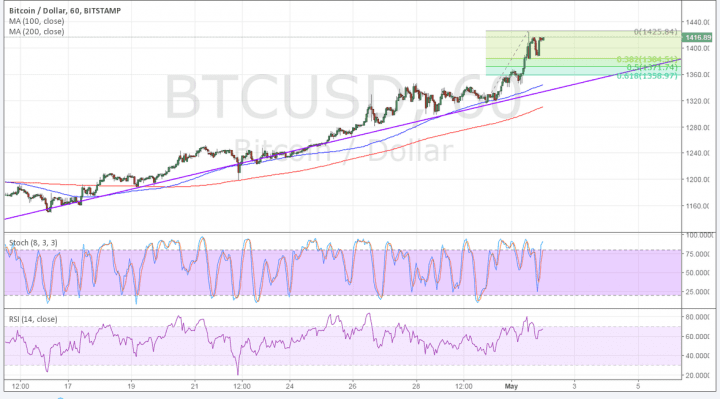 Stochastic is moving up to suggest that buying pressure is in play, possibly allowing bitcoin to surge past the swing high and create new record highs. However, this oscillator is already nearing the overbought region to reflect rally exhaustion. RSI is turning down from the overbought area to indicate that selling pressure is taking hold.

Market factors, however, signal that further gains are in the cards for bitcoin. There have been reports of rising volumes from Japanese exchanges after the government recently announced that it is officially recognizing bitcoin as a legal form of payment. In addition, reports suggesting that the US Securities and Exchange Commission could give the Winklevoss COIN bitcoin ETF another shot at approval is drumming up expectations of increased market liquidity and interest among US individuals and institutions as well.

As for the US dollar, economic data has been mostly disappointing, casting doubt on Fed rate hike expectations for the rest of the year. This is on top of disappointment over the healthcare overhaul and the Trump administration’s tax reform plan. With that, market factors also signal that the path of least resistance for bitcoin is to the upside, unless any reports potentially having a negative impact on the industry such as increased regulation in China pop up.