Another day, another record high! Bitcoin has surged to the $2200 level recently, signaling that bullish momentum remains very much intact and that further gains are in the cards.

However, the likelihood of profit-taking and a major correction also keeps getting stronger by the day. Applying the Fib tool on the latest swing low and high on the 4-hour chart shows that the 61.8% level lines up with the rising trend line and a former resistance area close to the $1900 level.

The 100 SMA is also close by, possibly acting as the line in the sand for any uptrend pullback. This short-term moving average is safely above the longer-term 200 SMA on the 4-hour time frame so the path of least resistance is to the upside. There doesn’t seem to be any indication of a downward crossover yet since the gap between the moving averages is sufficiently wide and increasing to reflect stronger bullish pressure.

RSI has been indicating overbought conditions for quite some time and looks ready to turn lower. If so, bitcoin price might follow suit and confirm that a correction is taking place. Stochastic is also indicating its intention to head south from the overbought area to reflect a return in selling pressure.

A shallow correction could find support at the area of interest around the 38.2% Fib, which coincides with the $2000 psychological support level. A slightly deeper pullback could also draw support from the 50% Fib at $1940. 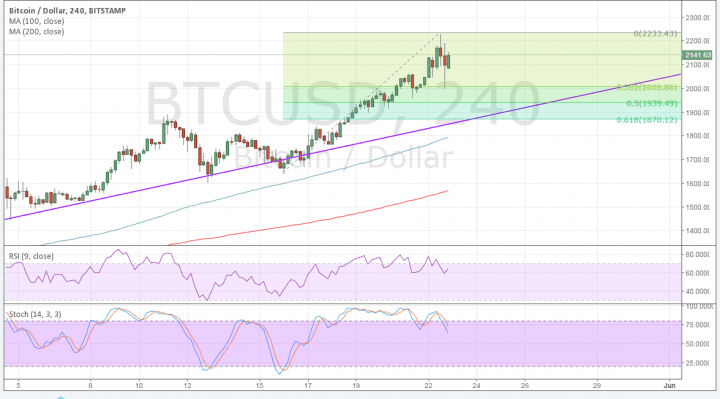 Market forces are still in support of more bitcoin gains, though, as rising geopolitical uncertainties have been in play for nearly a month already. This time, the focus is moving to the United Kingdom where a blast in the Manchester Arena raises significant concerns ahead of the snap elections and Brexit negotiations next month.

The incident has been ruled as a terrorist attack, leading to revived debates on the need to close UK borders. Now this could mean losing access to the single market, depending on how Brexit talks pan out. Over the weekend, officials were quoted saying that they’d walk out of the talks if EU officials slap the UK with a huge bill.

Over in the US, the spotlight is on the probe about Trump’s leak of highly-classified information to Russia so impeachment speculations are still in play.