Bitcoin has set new all-time highs yet again, proving that bullish momentum has been very strong and that it is still in play. However, price is testing a potential resistance level at the top of its ascending channel on the 1-hour chart so a pullback may be underway.

Using the Fib retracement tool on the latest swing low and high on the 15-minute chart shows that the 50% level lines up with the channel support. This could be enough to keep losses in check since it lines up with the 200 SMA dynamic inflection point.

The 100 SMA is above the 200 SMA so the path of least resistance on this time frame is to the upside. The short-term moving average is closer to the 38.2% Fib, which might also hold as support in the event of a shallow pullback. This level is also in line with a resistance turned support level at $2200.

RSI is already indicating overbought conditions, which basically means that buyers might need to take a break or book profits from here. Stochastic is also in the overbought zone and is about to turn lower to reflect a pickup in selling pressure. Stronger bearish momentum could lead to a break of the ascending channel support to pave the way for an even larger correction. 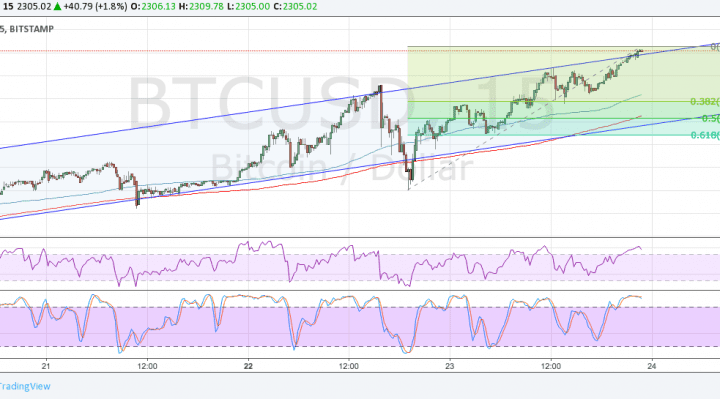 However, market factors are strongly in support of more bitcoin gains for the time being, as a combination of positive developments in the industry itself and weakening demand for the dollar is boosting BTCUSD. Over the weekend, bitcoin startup executives and miners had a meeting that resulted in a proposal for the scaling issue that is accepted by roughly 83% of the miners.

Meanwhile, demand for the dollar is still subdued owing to speculations of slower reforms from the Trump administration. Keep in mind, however, that the FOMC meeting minutes for May are about to be released and this could have some clues on how the June decision might pan out. Strong indications that a rate hike is in the cards could renew dollar strength and force BTCUSD to pull back.