Bitcoin has done it again as it went for new highs past the $2500 mark, barely showing signs of pausing from its climb. Technical indicators are giving mixed signals and it could be high-time for a major correction before the rallies go on.

The 100 SMA is above the longer-term 200 SMA on the 1-hour chart, confirming that the path of least resistance is to the upside. In addition, the gap between the moving averages is getting wider to reflect strengthening bullish momentum. This suggests that bitcoin could keep pushing for more gains with very shallow pullbacks only. The 100 SMA lines up with the rising trend line connecting the lows for the past few weeks, adding to its strength as a downside barrier.

Stochastic is already indicating overbought conditions, which means that buyers might need to take a break and let sellers take over. Similarly, RSI is in the overbought zone that reflects weakening buying momentum. Sellers could regain the upper hand once both oscillators turn lower and head south. 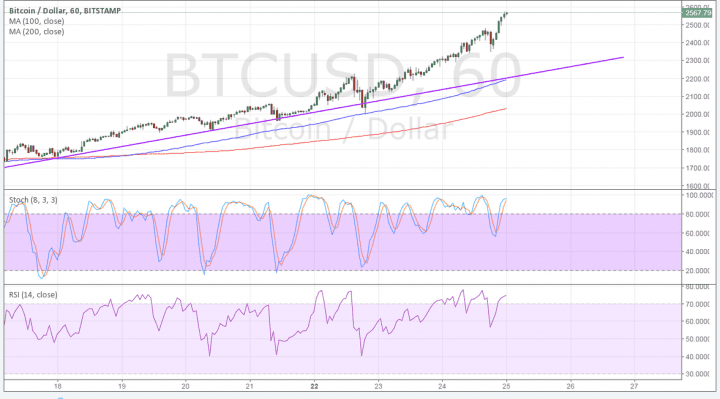 However, market factors are strongly in support of more bitcoin gains from here. After all, the recent agreement on the scaling issue represents a lot of progress among stakeholders, as proponents say that the latest proposal has the support of 83% of miners.

Apart from that, volumes continue to advance in Asia, particularly in Japan where the government just recently decided to recognize bitcoin as a legal form of payment and in China where PMI readings and a downgrade by Moody’s signaled weaker growth prospects down the line.

Geopolitical uncertainties are also keeping bitcoin supported due to its “safe-haven” appeal similar to that of gold. Risks are stemming from terror threats in the UK after the Manchester Arena bombing at the start of the week, making investors jittery ahead of the snap elections next month.

Lastly, the US dollar has been on the back foot recently after the FOMC minutes signaled that a June rate hike is not set in stone yet. Some policymakers said that it would be prudent to wait for more economic signs that the slowdown in Q1 is just transitory before proceeding with their tightening moves.