Bitcoin had a more volatile day than usual as it set a new record high then proceeded to make a sharp drop. This could represent a much-needed pullback, though, as bitcoin has been rallying almost nonstop in the past few days.

So far, BTCUSD is still above the rising trend line connecting the lows of price action since mid-May. This also coincides with a short-term Fib level and area of interest so it may be enough to keep gains in check and trigger a move back to the latest highs.

However, if a much larger correction is underway, bitcoin could retreat to the longer-term ascending trend line visible on the 4-hour chart. This also lines up with the 61.8% Fibonacci retracement level based on the swing high and low since May 15. Also, this potential support zone is close to the $2100 psychological level and the 100 SMA dynamic support.

Speaking of moving averages, the 100 SMA is above the longer-term 200 SMA on the 4-hour time frame so the path of least resistance is to the upside. In other words, the uptrend is more likely to resume than to reverse. The gap is getting wider, which suggests that bullish pressure is getting stronger. 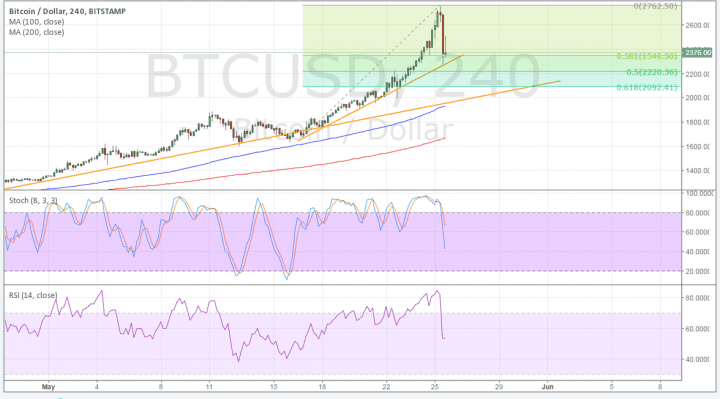 Stochastic is turning lower from the overbought region to suggest that sellers are regaining control of price action or that profit-taking is in order for the bulls. Similarly, RSI is heading south so bitcoin price could follow suit. A strong surge in bearish momentum could spur a break below the trend line support.

In terms of fundamentals, market factors seem to be strongly in support of further BTCUSD gains. Over the weekend, developers and miners appear to have finally reached a consensus on the scaling issue. They released a document containing the details of the proposal later on in the week and reiterated that this has received the support of 83% of the miners, suggesting that there won’t be any “hard fork” issues down the line.

Meanwhile, geopolitical risks are still in play and encouraging traders to seek higher returns in non-traditional financial assets like digital currencies. Uncertainty from the OPEC meeting has passed and the attention now turns to the goings-on in the UK.