Bitcoin has sold off in the past couple of days, representing a large correction from the week-long rally that occurred previously. Price seems to have found support on a retracement to an area of interest on the 4-hour time frame.

In particular, BTCUSD bounced off the 61.8% correction level around $2000-2050, which lined up with a former resistance area. Price had been moving inside a small descending channel formation but has also broken past the resistance to signal a return in bullish momentum.

Also, the 100 SMA held as dynamic support as it coincided with this area of interest. Speaking of moving averages, the 100 SMA is above the longer-term 200 SMA so the path of least resistance is to the upside. In addition, the gap between the moving averages is getting wider to reflect a pickup in buying momentum.

In that case, bitcoin could eventually make its way back up to the highs at $2730 or even establish new ones again. RSI is pulling up from the overbought zone to show that bulls are regaining the upper hand. However, stochastic appears to be turning lower so bears might still have some energy left. Support areas at the 61.8% Fib and 200 SMA could still keep losses in check. 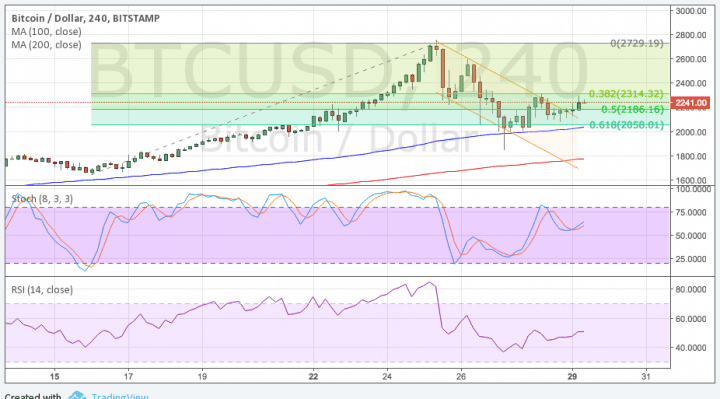 Last week’s bitcoin price run was fueled by several factors but it looks like these catalysts are losing their firepower recently, leaving profit-taking to push the cryptocurrency back down. The upward revision in the US GDP also revived demand for US assets and the dollar, as traders are buzzing about rate hike expectations once more.

Meanwhile, industry updates have also faded in terms of the bullish momentum and traders are looking for more news that could sustain the climb. In any case, background factors remain positive for bitcoin but consolidation could be underway until the next big thing pops up.

Geopolitical risk is still present in several parts of the world, particularly in the UK and in the Asian region. For the former, the upcoming snap elections would bring a lot of uncertainty for the European markets. In Asia, North Korea’s consecutive missile tests are keeping traders on edge, which could mean more influx of funds from Japan to bitcoin.