Bitcoin was recently trading inside an ascending channel formation on its daily time frame to indicate an uptrend. Price seems to be gearing up for a steeper climb now that it also broke past the resistance at $1400.

Stochastic is indicating overbought conditions and is turning lower to reflect a pickup in selling pressure. RSI is in the overbought zone as well so buyers might need to take a break at some point and let sellers take over. If so, this upside channel break could prove to be a fakeout and bitcoin could slide back to the nearby support areas, possibly until the mid-channel area of interest at $1200-1300. 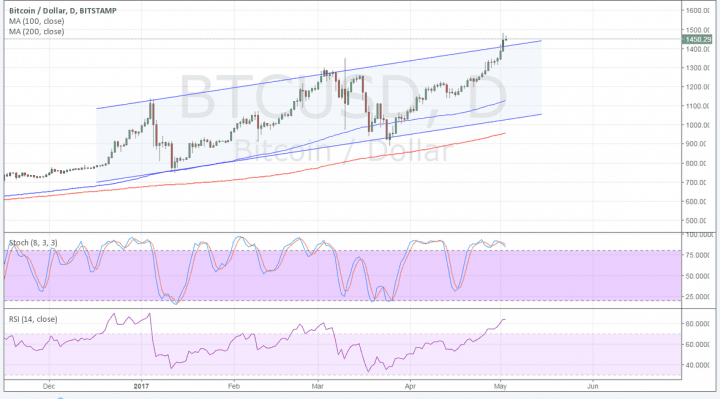 Additional dollar volatility is to be expected in today’s New York trading session since there are several top-tier events in the US. For one, the FOMC is set to announce its latest monetary policy decision and, even though no actual rate changes are eyed, traders are on the lookout for clues of any shift in bias. In particular, market watchers are keen to find out if policymakers are adjusting their outlook to incorporate the likelihood that tax reform won’t be implemented within the year.

Prior to this, the US is set to print its ADP non-farm employment change report and the ISM non-manufacturing PMI. Recall that the manufacturing survey printed a weaker than expected result and a decline in the jobs component so similar results are eyed for the non-manufacturing sector. If this is accompanied by a downbeat ADP reading, traders could start pricing in expectations for another dismal NFP report.

The March report showed a 98K reading, far lower than previous gains and suggestive of a sharp slowdown in hiring. The advanced GDP reading for the first quarter also fell below estimates, leading many to think that the Fed could slow down its pace of tightening. If this is confirmed during the FOMC announcement, bitcoin could take advantage of dollar weakness.