Bitcoin is currently in consolidation mode, moving inside a rising wedge pattern visible on its short-term time frames. Price is approaching the peak of its formation so a breakout might be due sooner or later.

The 100 SMA is above the longer-term 200 SMA so the path of least resistance is to the upside. In other words, a break higher is more likely to take place than a breakdown. Note that this chart pattern spans $2000-2315 so the resulting move could be of the same size. In addition, the 100 SMA lines up with the wedge support, adding to its strength as a floor.

However, stochastic is turning lower to suggest a return in selling pressure. A break below the 200 SMA dynamic inflection point might be needed to confirm that bearish momentum is in play, possibly taking bitcoin back to the $2000 levels or lower.

RSI is on middle ground, suggesting that the consolidation could go on for a while. Nearby support is located at $2300 and resistance at $2315. 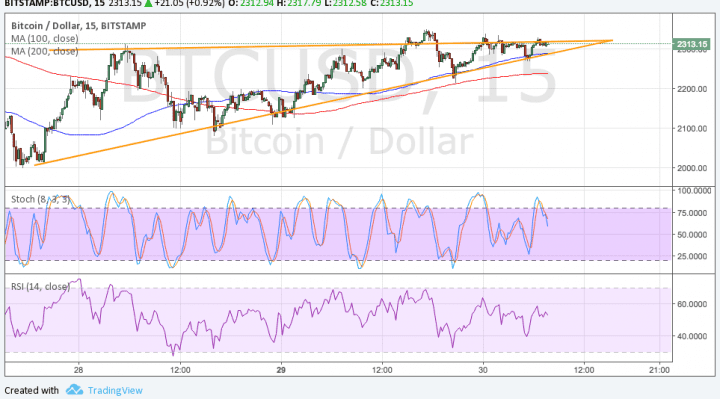 Geopolitical headlines are still in play, with the most recent being the Greek debt drama. Recall that the possibility that the debt-ridden nation would miss its loan obligation in the past led to capital controls and a surge in bitcoin price. At that time, individuals had been looking for alternative ways to move money around while banks and stock markets were closed in the country.

Apart from that, the upcoming snap elections in the United Kingdom could keep European traders on edge. Opinion polls indicating a narrowing lead by the Conservative Party versus Labour have weighed on overall market sentiment and could lead to a flight to safety to bitcoin.

To top it off, the spotlight is shining back on the probe into Trump’s intelligence information leak to Russia. This could dampen demand for US assets on lower speculations of fiscal reform, thereby dragging the dollar lower against bitcoin as well.

So far, there have been no updates industry-wise so traders are likely holding out for catalysts that could take bitcoin price further north.