Bitcoin is starting to reestablish its uptrend, moving inside a new ascending channel visible on the 1-hour time frame. Price is currently testing support and might be due for a bounce back to the resistance at $2400.

However, the 100 SMA is below the longer-term 200 SMA so the path of least resistance is still to the downside. In other words, its possible for the channel support around $2200 to break and a downtrend to ensue. The 200 SMA dynamic inflection point lines up with the mid-channel area of interest so a quick bounce could still encounter a ceiling nearby.

Stochastic is already approaching the overbought region and looks ready to turn lower to reflect a pickup in selling pressure. RSI, meanwhile, is on middle ground and indicating that consolidation could carry on. 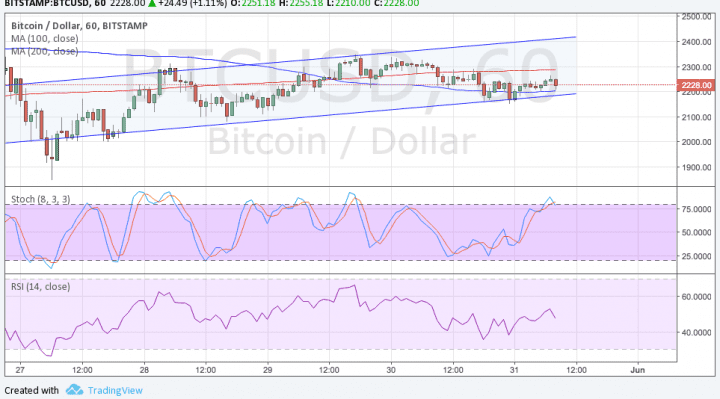 The lack of major market catalysts has made it difficult for bitcoin to regain volatility seen in the previous week. At that time, geopolitical risks were strongly in play and industry news also contributed to further gains. However, profit-taking quickly followed as the rally lost momentum and traders are now sitting on their hands, waiting for the next directional clues.

With that, the dollar could be poised to reverse its climb once more market participants price in weaker expectations of a September rate hike or another one before the end of this year. It doesn’t help that the focus on the probe into Trump’s intelligence information leak to Russia has dampened speculations of fiscal reform, leading Wall Street to return some of its recent gains as well.

Traders could stay on the hunt for alternative assets like cryptocurrencies that offer potentially higher returns. In Europe, the upcoming snap elections in the United Kingdom and persistent financial risks in Greece and Italy could lead to a revival in bitcoin rallies soon.