Bitcoin recently set a new record high after it broke out of its symmetrical triangle consolidation pattern. Price topped out at $1670 and could be due for a pullback to nearby support areas.

Applying the Fibonacci retracement tool on the latest swing low and high shows that the 38.2% level lines up with a resistance-turned-support area of interest around $1615. A larger correction could last until the 50% Fib at the $1600 major psychological support or at the 61.8% level closer to the broken triangle top and the 100 SMA dynamic support.

Speaking of moving averages, the 100 SMA is above the longer-term 200 SMA so the path of least resistance is to the upside. However, the gap between the two trend-following indicators is narrowing to suggest that bullish pressure may start to weaken soon.

In addition, stochastic is already indicating overbought conditions and might be due to turn lower. If that happens, more profit-taking activity off these highs could be seen. RSI is also in the overbought zone and is starting to turn back down to indicate that sellers are starting to gain the upper hand. 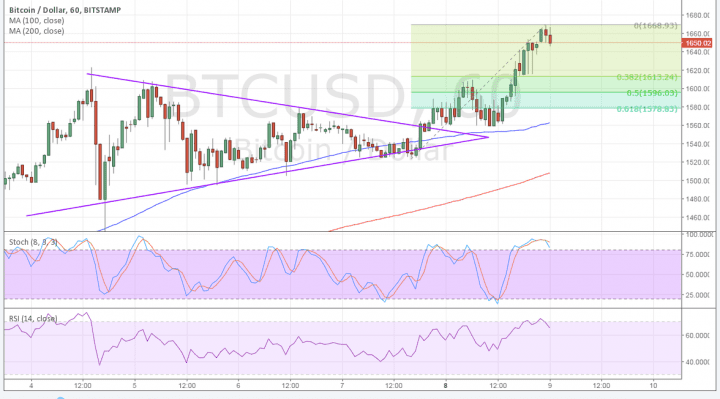 The chart pattern spans $1460 to $1620 so the resulting uptrend could be of the same size. However, bulls might need more buyers to join the bandwagon before they gain stronger momentum and possibly even set new record highs again.

This upside is coming from fresh talks of financial deregulation happening in US markets, as the Treasury committee tasked to review the sector has just finished a closed-door meeting discussing the efficacy of the Volcker Rule. This rule was implemented to prevent banks from misappropriating client funds and taking on excessive risk.

This also follows the confirmation of the new SEC chairperson who has been charged by Trump to loosen rules in the financial industry while conducting stricter oversight. With that, market watchers are hopeful that the bitcoin COIN ETF would have better chances of gaining approval.

Keep in mind that the Japanese government regulation in bitcoin has actually resulted to stronger market interest and volumes, which are seen to have driven BTCUSD higher over the past few days. If something similar happens in the US, bitcoin could see further upside on increased liquidity.