Bitcoin has once again established new highs and is closing in on the $7000 major psychological mark. Several take profit orders are likely located at that level, so a pullback could materialize soon.

Stochastic is already indicating overbought conditions so buyers are already feeling exhausted. RSI is still moving up but is also in overbought territory, which means that sellers could take over bitcoin price action soon.

If so, bitcoin could make a correction to the ascending trend line connecting the lows since late September. This lines up with a short-term are of interest near $6000.

The 100 SMA is still above the longer-term 200 SMA so the path of least resistance is to the upside. This means that the uptrend is more likely to continue than to reverse. In addition, the 100 SMA is in line with the ascending trend line, adding to its strength as support when tested. 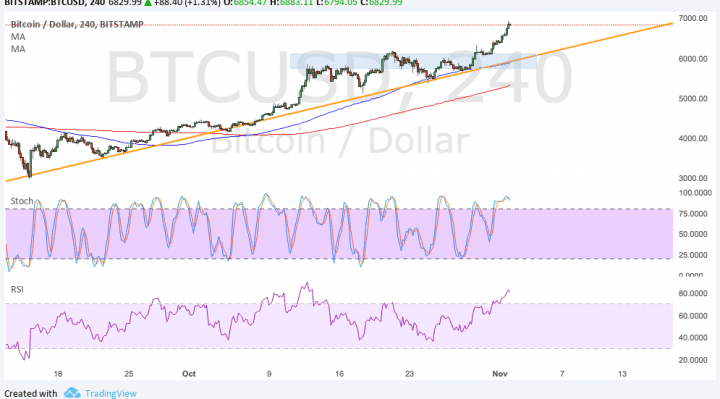 The FOMC decided to keep interest rates on hold as expected while slightly upgrading its growth assessment of the US economy. This keeps a December rate hike a possibility but traders appear more interested in the next Fed Chair pick since this would set the tone for 2018 tightening odds. In addition, stalling progress on the tax plan is keeping a lid on the dollar’s gains.

As for bitcoin itself, the network hard fork could be the main catalyst for a pullback or yet another run higher. Bitcoin gold has launched and many expect this rival version to be smoked out once the upgrade is completed. However, any indication of higher acceptance for bitcoin gold or any other competitor versus the core version could lead to unwinding of long positions.

For now, the cryptocurrency is enjoying strong support from investor interest owing to the announcement by CME that they will offer bitcoin futures later in the year. Of course any roadblocks when it comes to regulation could also lead to price dips but any sign of progress could also lead to more gains.