Bitcoin has been on a steady uptrend since the third week of September and is moving above an ascending trend line on its 1-hour chart. Price could be due for a correction to this support area and applying the Fib tool on the latest swing high and low shows where a bounce might take place.

The 61.8% Fib is closest to the trend line around $4450-$4500, which also lines up with a former resistance area. This is also near the 200 SMA dynamic inflection point while the 100 SMA is near the 38.2% Fib at $4600. The 100 SMA is above the longer-term 200 SMA to signal that the path of least resistance is to the upside, which means that the rally is more likely to resume than to reverse.

Stochastic seems to be heading south but is already dipping into the oversold region and starting to turn higher. This signals that bullish momentum could return and allow bitcoin to revisit the swing high or even its all-time highs close to $5000.

RSI has a bit more room to head lower so bitcoin could stay in correction for a while until the oscillator hits oversold levels and turn higher as well. 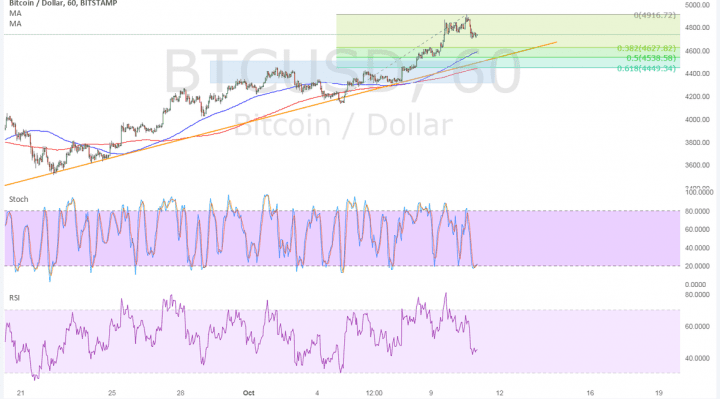 The dollar is losing some ground on fresh setbacks in tax reform and another round of concerns from North Korea. These risks usually drive traders away from traditional markets like stocks, currencies, and commodities, leading them to seek higher returns in digital gold or alternative markets.

Another event risk for the dollar is the release of the FOMC minutes, which might not be as hawkish as the actual September statement. FOMC policymakers have been expressing concerns about weak inflation, so these might also be emphasized in the transcript of their latest meeting.

Apart from that, the CPI readings and retail sales reports lined up on Friday could also shape Fed December hike expectations. Keep in mind that the NFP reading printed a surprise 33K drop in hiring so consumer spending likely took a hit during the hurricanes as well.