Bitcoin has been on a steady climb and is edging close to testing its record highs, with an upside break likely taking it to the next Fib extension levels. Based on the latest pullback move, the 38.2% extension is near the $5000 major psychological level then the 50% extension is close to $5100.

The 100 SMA is above the longer-term 200 SMA so the path of least resistance is to the upside and the widening gap signals strengthening bullish momentum. Another pullback could still draw support from the 100 SMA dynamic inflection point at the swing low or $4715.55.

Stochastic is moving up but is also treading close to overbought levels, which could mean that profit-taking is about to take place. RSI is still on the move north so bitcoin might follow suit, but selling pressure could return once both oscillators turn down from overbought levels. 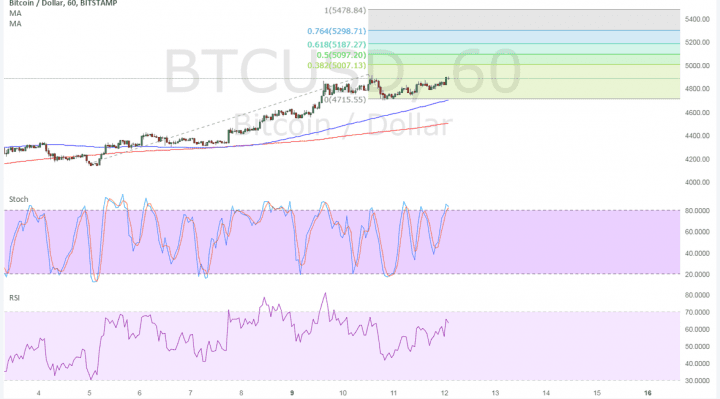 The US dollar has taken a hit across the board when the FOMC meeting minutes for September were released. The report revealed that some policymakers were still concerned about lackluster inflation and how the factors dragging price levels down might not be transitory after all. This cast some doubts on the likelihood of a December Fed rate hike even as other policymakers still thought that another rate hike is possible before the end of the year.

Traders will likely turn their attention to the CPI and retail sales reports next as these could provide more clues on how the economy has been performing and whether or not policymakers might shift to a more upbeat stance. Keep in mind that the recent hurricanes likely had an impact on how the headline figures might come out so revisions could be possible later on.

As for bitcoin, the focus is on next month’s upgrade, which many foresee to have a similar effect on the August hard fork. Some analysts predict that, if all goes well, bitcoin could head to the $6000 levels next.