Bitcoin is showing sustained bullish momentum after recently surging to new all-time highs. Anticipation for the next network upgrade has drawn investors back to this particular cryptocurrency as many expect the same reaction to the August upgrade.

However, bitcoin is stalling at its latest highs, although a quick pullback has been seen. Applying the Fib extension tool on this move shows the next upside targets around the $6000 levels.

The 100 SMA is safely above the longer-term 200 SMA on the 1-hour time frame so the path of least resistance is to the upside, which means that the rally is more likely to continue than to reverse. The gap between the moving averages is widening to reflect strengthening bullish momentum as well. The 100 SMA has recently held as dynamic support in the latest dip and might continue to keep losses in check. 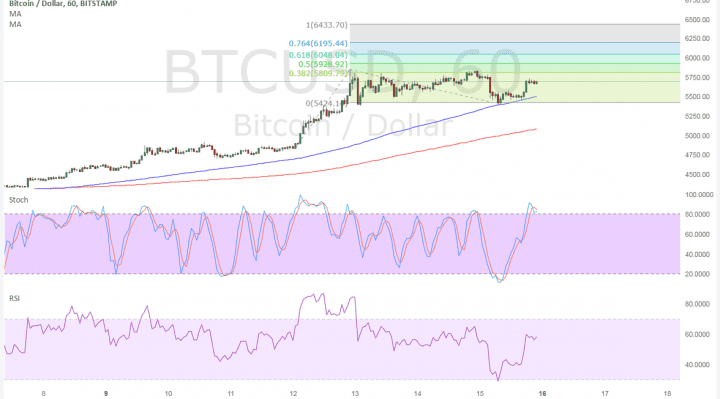 Stochastic is already indicating overbought conditions, though, so there may be some profit-taking activity due soon. If so, a larger correction could take place, possibly until the 200 SMA dynamic support. RSI is on the move up, on the other hand, to reflect the presence of bullish pressure.

Market factors are more in favor of bitcoin these days as there are a number of risks facing the dollar. For one, CPI reports turned out weaker than expected on Friday, dampening hopes of a rate hike in December or three more moves next year. Although Yellen retained her hawkish tone in her speech this weekend, other policymakers might not be as optimistic about inflation prospects.

Besides, there are speculations that Yellen might be replaced by a less hawkish successor, further weighing on the odds of seeing more tightening moves in 2018. There’s also the looming prospect of a North Korean missile strike that keeps geopolitical risk in play, supporting bitcoin while it persists.