Bitcoin has broken below the short-term ascending triangle shown in yesterday’s article, which means that bearish pressure is picking up. This could pave the way for a correction to the nearby Fibonacci retracement levels or the rising trend line connecting the lows since the third week of September.

This trend line is close to the 38.2% Fib level at the $5200 handle but a deeper pullback to the 50% Fib at the $5000 mark is also possible. The 100 SMA is above the longer-term 200 SMA to indicate that the path of least resistance is to the upside or that the uptrend is more likely to continue than to reverse.

This short-term moving average is also in line with the 61.8% Fibonacci retracement level just slightly below the trend line and the $4800 level. The pullback could still find support at the 200 SMA dynamic inflection point closer to $4200, but this could be the last line of defense for the bulls.

Stochastic is heading lower to show that bearish pressure is in play but is closing in on oversold levels to signal exhaustion among sellers. RSI has more room to fall so bearish momentum could stay for a while until the oscillators hit oversold levels and turn higher. 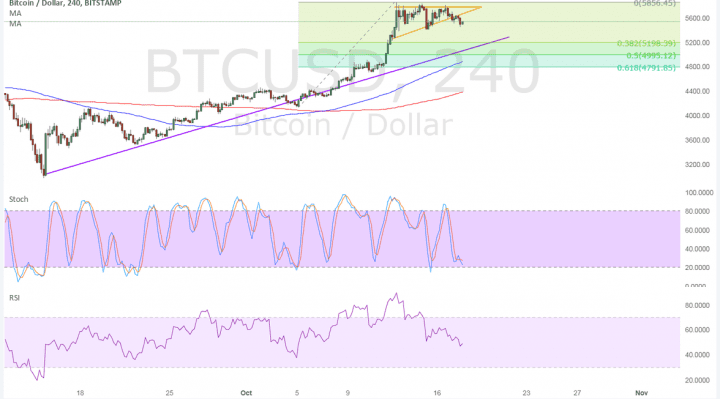 The US dollar is regaining support from the prospect of a more hawkish Fed head being appointed by Trump. He is still scheduled to meet with Chairperson Yellen on Thursday but the fact that he was impressed by Stanford alum John Taylor could mean lower odds for more dovish candidates Powell or Warsh.

Meanwhile, bitcoin traders appear to be booking profits off their previous long positions to reduce exposure to the network upgrade next month. Still, there are strong expectations that this could turn out the same way it did in August, with the core version emerging stronger than other rivals and the network being able to handle more transactions than before.