Bitcoin broke below the short-term triangle consolidation pattern and has dropped to test the rising trend line. This support area has kept losses in check and the cryptocurrency looks ready to revisit its latest highs.

However, there are technical signs that the rally may be losing steam. Although the 100 SMA is above the longer-term 200 SMA, the gap between the moving averages is narrowing so a downward crossover and return in bearish pressure may be due.

Also, stochastic is indicating overbought conditions and looks ready to turn lower. This could also bring more bearish pressure to the mix and spur another test of the trend line. Price is nearing the broken support of the triangle and also appears to be hitting a ceiling at the 61.8% Fib on the triangle break.

RSI is on the move up, though, so there’s a chance that bullish momentum could stay in play. In that case, a test of the all-time highs or even a break higher may be in order. 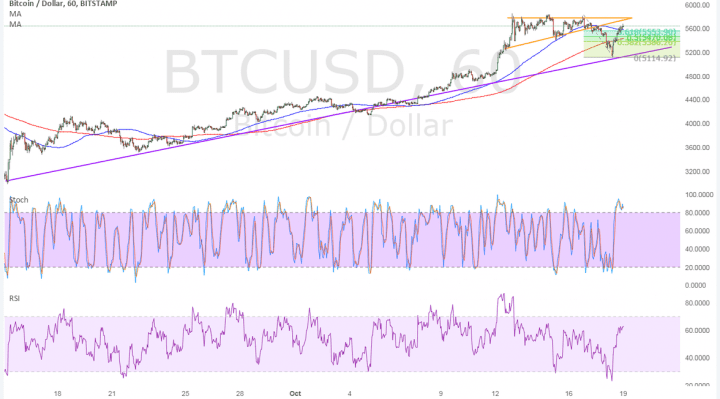 Bitcoin suffered a sharp drop on rumors that the CFTC might regulate cryptocurrency trading but this was taken as an opportunity by bulls to get in at better prices, thereby triggering a pop higher off the rising trend line support.

As for the dollar, there are still risks in connection with Trump’s pick for the next Fed head. He was reportedly impressed by John Taylor but will be meeting with Yellen later today as the White House has shared that a decision will be announced in the coming days. This could determine the pace of tightening for next year and a dovish pick could mean more losses for the dollar against bitcoin.