Bitcoin continues to trend higher but is showing tighter and tighter consolidation. Price has formed higher highs and higher lows inside a rising wedge pattern visible on the 4-hour time frame.

Bitcoin is currently testing the wedge resistance and might be due for a drop back to support. The 100 SMA is below the longer-term 200 SMA to signal that the path of least resistance is to the downside. However, the gap between the moving averages is narrowing to signal a potential upward crossover and return in bullish momentum.

Stochastic is also pointing up to signal that buyers could still have the upper hand. An upside break from the $4400 area could send bitcoin price up by $1600 or the same height as the wedge formation. Similarly, a downside break could lead to a drop of $1600 but there are several support zones at the moving averages dynamic inflection points nearby. RSI also looks ready to turn lower to indicate a pickup in selling pressure. 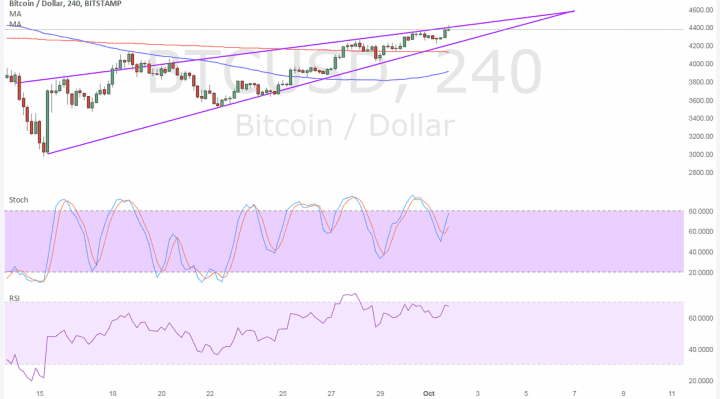 Bitcoin remains supported despite the shutdown of exchanges in China and the downturn in volumes. Risk aversion is present in the financial markets while traders stay on the lookout for any escalation in North Korean tensions, which could send digital gold skyrocketing again.

The dollar has also caught a bid earlier on due to hawkish FOMC rhetoric but the currency quickly returned its recent wins as Yellen admitted that they may have overestimated the strength in the labor market. Tax cut talks also boosted the dollar but the effect was not sustained as traders have yet to see signs of progress in fiscal reform.

Looking ahead, market sentiment could still play a huge role in determining where bitcoin might be headed next, but the lower volatility and range-bound conditions are likely to be staples. The NFP report is due on Friday and investors are keen to find out how this might impact Fed December tightening expectations, especially since analysts are pricing in a meager 88K gain in hiring.