Bitcoin broke past the resistance around $5800 and zoomed up close to $6200 before retreating. Using the Fib tool on this move shows that the 50% level lines up with the area of interest, so bulls might be waiting to enter at that area.

However, bitcoin appears to have bounced off the 38.2% Fibonacci retracement level already as this is sandwiched by the 100 SMA and 200 SMA. The shorter-term moving average is above the longer-term moving average, which means that the path of least resistance is to the upside. In other words, the climb is more likely to resume than to reverse.

Stochastic is moving up but is nearing overbought levels, which could reflect rally exhaustion. This could inspire a larger pullback until the 61.8% Fib at $5500, which might be the line in the sand for a rally. If the Fib levels keep holding as support, bitcoin could soon revisit the all-time highs or make new ones. RSI has plenty of room to climb so bullish momentum could stay in play for much longer. 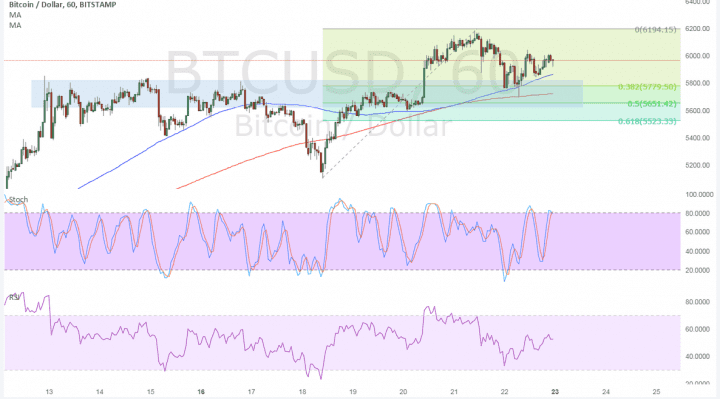 There have been rumors that China could reverse its decision to ban bitcoin exchanges, something that caused a massive bitcoin selloff earlier on. If these prove true, investor demand and activity could pick up, which might mean higher volumes and volatility.

Keep in mind that bitcoin is also approaching a network upgrade next month and many are already positioning to take advantage of a strong rally that might be similar to the price reaction to the previous hard fork back in August. After all, this upgrade could leave the network more stable and able to handle more transactions than before.

As for the dollar, there are still speculations that US President Trump could appoint a dovish Fed head. This could severely dampen tightening hopes for the rest of 2018, which could mean a lot of unwinding for the US dollar. In any case, the December hike is still not set in stone as there is still one more set of major data due before policymakers have their meeting.