Bitcoin appears to be gaining bullish momentum after a deep pullback, so it’s time to look at the next upside targets. Price is also breaking above the short-term descending channel, indicating a pickup in bullish pressure.

However, the 100 SMA appears to be crossing below the longer-term 200 SMA to signal that bearish pressure is returning. If this materializes, more sellers could join in and push bitcoin back down. In that case, price could head back down to the latest lows at $5400.

Stochastic is already indicating overbought conditions, which means that buyers need to take a break and let sellers take over. RSI has some room to climb but is also nearing overbought levels, reflecting weakening bullish momentum. 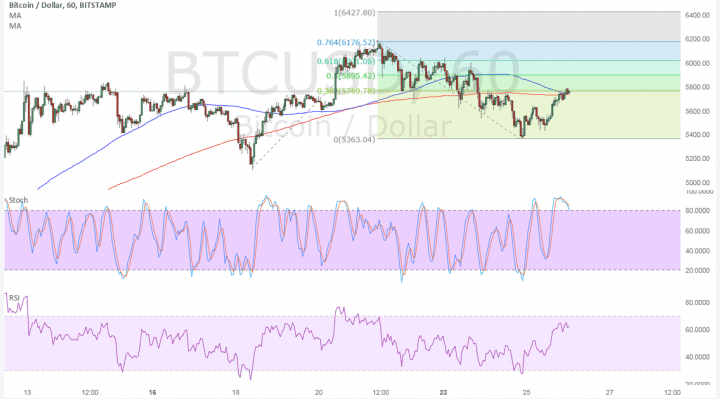 The US dollar is currently being weighed down by weakening prospects of tax reform passing Senate and the odds of Trump appointing a dovish Fed Chairperson. This could change rate hike expectations for 2018 and keep a lid on the currency’s gains.

Data from the US economy turned out stronger than expected in the latest trading session, with durable goods orders beating expectations. This led to forecasts that business investment will have a larger contribution to quarterly growth than initially projected.

Meanwhile bitcoin is regaining ground after caving to some concerns about the emergence of bitcoin gold. This version takes the reliance off costly mining activity but many say that it could suffer the same fate as bitcoin cash. In any case, many are still hopeful that the core version has a successful upgrade next month and gains the capability to handle more transactions than before.