Bitcoin looks ready to form a head and shoulders reversal pattern if it fails to sustain the climb past current levels. Technical indicators are all hinting that the rally could stall, possibly taking bitcoin down to the neckline at $5200-5400.

A break below this neckline could lead to roughly a $1000 drop since this is the height of the head and shoulders pattern. The 100 SMA has just crossed below the longer-term 200 SMA to signal that the path of least resistance is to the downside. This means that selling momentum could kick in soon.

RSI is also turning lower to show that bearish pressure is present. Stochastic has a bit more room to climb but is also approaching overbought levels to indicate potential profit-taking in long positions and a likely dip. 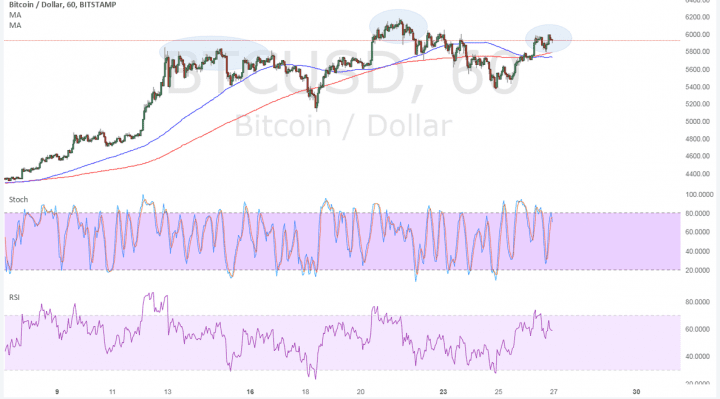 Bitcoin is nearing its network upgrade and there are concerns that rival bitcoin gold could lead to two separate versions of the cryptocurrency. This mirrors the same concerns related to bitcoin cash back in August but the upgrade turned out successful and allowed the network to handle more transactions than usual.

The dollar also has a bunch of potential movers on tap, among which is the advance GDP release due in today’s US session. Analysts are projecting slower 2.6% growth compared to the earlier 3.1% figure on account of the hurricanes in September, but indicators like durable goods orders hinted at strong business conditions.

Apart from that, progress in the Trump administration’s tax reform plans has been supportive of the dollar. The House passed a measure that could allow a tax bill to move forward in Senate without needing to secure supermajority, which means that it only needs the support of Republicans.

Lastly, Trump’s pick for next Fed Chairperson could also have a strong impact on the dollar since this would set the tone for rate hikes next year. Reports suggest that the choices are down to Powell and Taylor, with the former being seeing as a bearish scenario.