Bitcoin continues to advance against the dollar but seems to be slowing on its climb, so it’s time to revisit the potential upside inflection points. The Fibonacci extension tool on the daily time frame correction reveals that price is nearing the 50% extension at $4578, which might contain plenty of take-profit orders.

The 100 SMA is still above the longer-term 200 SMA, though, so the path of least resistance is still to the upside. This means that the rally is more likely to continue than to reverse. The gap between the moving averages is also widening to reflect stronger bullish momentum, with the 100 SMA previously holding as dynamic support.

Stochastic is already indicating overbought conditions and is prepping for a downward crossover to signal a return in bearish pressure. In that case, bitcoin might still dip to the nearby support levels around $4000-4300. 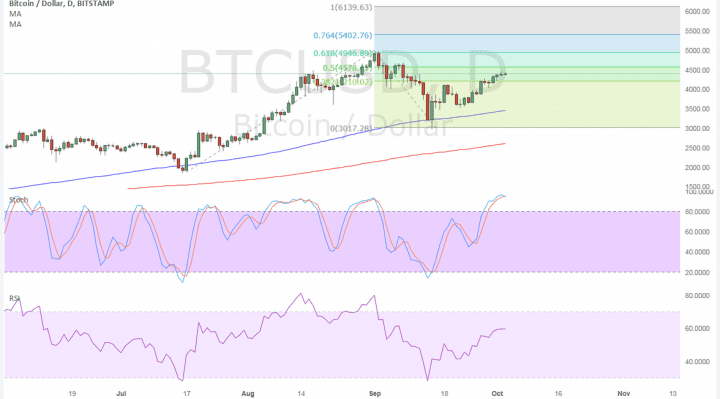 Both bitcoin and the dollar are currently enjoying support from geopolitical tensions, with the former functioning as digital gold and taking advantage of investors’ appetite for higher returns outside of traditional markets like stocks and commodities. The latter still has its safe-haven appeal intact and the prospect of tax reform and US interest rate hikes add to its luster.

Last week, bitcoin also got a boost from remarks assuring that it is more than just a fad, countering previous opinions that it is in a bubble that is about to burst. However, the dollar is putting up a pretty strong fight after the ISM manufacturing PMI printed stronger than expected results that could lead to an upside NFP surprise, which might then shore up December tightening expectations.

Also, keep in mind that the Fed is scheduled to start its balance sheet unwinding this month and would trim reinvestments by $10 million so there could be some upside pressure on long-term rates and the dollar as well.