Bitcoin continues to trend higher and is moving inside an ascending channel on its 1-hour time frame. Price just bounced off the resistance and could be due for a pullback to support.

Applying the Fibonacci retracement tool on the latest swing high and low shows that the 50% level is in line with the mid-channel area of interest while the 61.8% level is slightly closer to the bottom of the channel at $5800.

The 100 SMA is above the longer-term 200 SMA so the path of least resistance is to the upside. This means that the rally is more likely to continue than to reverse. The 100 SMA coincides with the 61.8% Fibonacci retracement level, adding to its strength as support.

Stochastic is on the move up to suggest that there is still some bullish momentum left. This means that bitcoin could still bounce off the 38.2% level back up to the swing high at $6348 or to the channel top at $6400.

However, this oscillator is already approaching the overbought zone to signal rally exhaustion. Turning lower could draw more sellers in, especially since RSI is already heading south. Either way, this could mean that the correction could go on for much longer or that a breakdown and reversal is due. 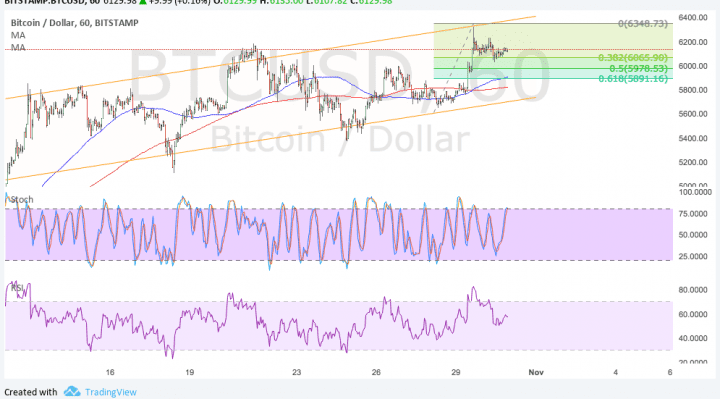 Volatility could pick up for BTCUSD this week as there are several catalysts for the dollar. This includes the FOMC decision, NFP report, and Trump’s announcement of his Fed Chairperson pick. Reports are suggesting that he would pick Powell and this scenario would likely dampen 2018 tightening expectations.

As for bitcoin itself, expectations for the network upgrade in November would likely drive price action. Bitcoin gold has officially launched but acceptance has been low so investors appear confident that the core version could outlast the rest.

In any case, profit-taking could still happen ahead of the actual hard fork as traders move to reduce their exposure to this risk. This could bring bitcoin down to better levels to catch the uptrend.