Bitcoin is starting to break below the bottom of its rising wedge consolidation pattern to signal a return in selling pressure. The wedge pattern is approximately $1600 tall so the resulting selloff could last by the same amount.

The 100 SMA is below the longer-term 200 SMA on the 4-hour time frame so the path of least resistance is to the downside. This means that the selloff would likely persist. However, the gap between the moving averages is narrowing to indicate a slowdown in bearish pressure. If an upward crossover materializes, bullish momentum could still kick in and allow the uptrend to resume, with the moving averages acting as nearby inflection points.

Stochastic is crossing up to suggest a pickup in buying pressure as well. RSI, on the other hand, has room to head down so bitcoin might still follow suit. 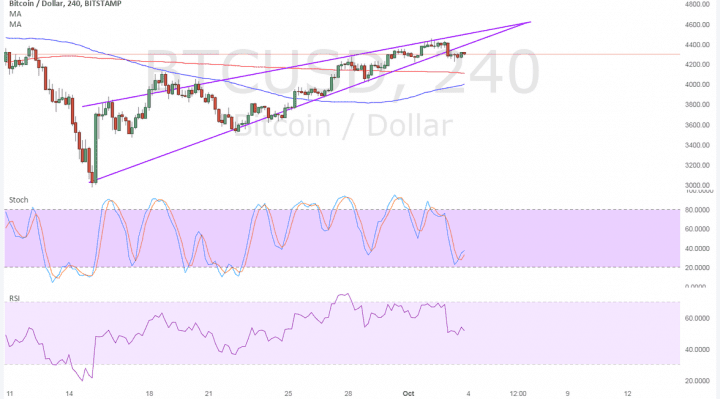 The US dollar has been strongly supported since the previous week on renewed Fed rate hike expectations for December and the attention on the government’s tax reform plan. Leading jobs indicators released earlier this week signaled a potential upside surprise in Friday’s NFP numbers, which could mean a strong boost for December tightening odds. Apart from that, the central bank is scheduled to start its balance sheet unwinding this month, also putting some upside pressure on the dollar.

Meanwhile, bitcoin isn’t out of the woods when it comes to another potential split in November even as Bitcoin Core saw a 30% increase in nodes over the past three months. Members of the bitcoin community could still oppose SegWit2x and probably create yet another version of the cryptocurrency.

Volatility has been in check on lower market volumes and activity owing to the closure of bitcoin exchanges in China a few weeks back, although Japan is rapidly compensating for the lost market share. Looking ahead, the ISM non-manufacturing PMI and ADP non-farm employment change reports could lead to some moves in BTCUSD ahead of the actual NFP release.