Bitcoin has formed a small head and shoulders pattern on its 1-hour time frame and has broken below the neckline to confirm that a reversal is underway.

The chart pattern is approximately $200 tall so the resulting selloff could be of the same size. However, technical indicators are showing there’s more bearish momentum that could stay in play.

The 100 SMA is still above the longer-term 200 SMA so the path of least resistance is still to the upside, but the gap between the moving averages is narrowing to signal that bullish pressure is weakening and that a downward crossover may be due. Price also appears to have completed its pullback to the broken support zones to show that bears have the upper hand.

Stochastic is heading south, also confirming that sellers are in control. RSI is moving lower so bitcoin might keep following suit but is closing in on the oversold region to suggest potential profit-taking, probably around the area of interest at $3800-4000. 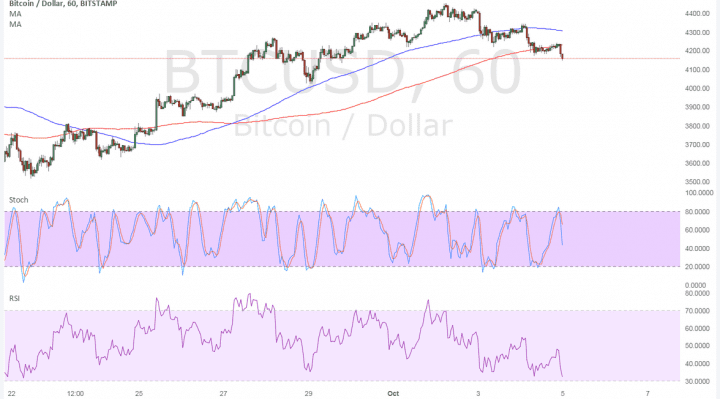 The dollar is strongly supported across the board on the prospect of US tax reform, strong economic data, and the odds of another Fed interest rate hike for December. Bitcoin, on the other hand, is reeling from the pickup in risk-taking on easing geopolitical tensions.

Apart from that, news that South Korea moved to ban ICO funding is also leading traders to speculate that they might enforce a ban on bitcoin exchanges like China did. So far, Japan is making up for the lost market share to Chinese investors but volumes and trading activity have taken a serious hit.

Barring any changes in market sentiment, bitcoin could continue to edge lower and give up ground to the dollar. The upcoming NFP release could pose a risk to the dollar, though, as a surprise disappointment could wipe off Fed tightening expectations for the rest of the year.