Bitcoin appears to be stalling from its rally and that’s likely due to price stalling at a significant long-term area of interest. Price is testing resistance at the $4400 mark and could be due for a drop back to support.

Applying the Fibonacci extension tool on what appears to be a bearish pullback shows that the next potential support is at $3648 then at the 50% extension near $3400. A more prolonged selloff could last until the 61.8% extension at $3171 then at the 76.4% extension at $2876. The full extension is around the $2400 level.

The 100 SMA is above the longer-term 200 SMA on this time frame, though, so the path of least resistance is still to the upside. The 100 SMA is also close to the 50% extension, adding an extra layer of support.

Stochastic is turning lower to reflect a pickup in selling pressure. A slight bearish divergence can be observed since early September as the oscillator formed higher highs while bitcoin price had lower highs. RSI, on the other hand, is on the move up so bitcoin could still follow suit up to the record highs close to $5000. 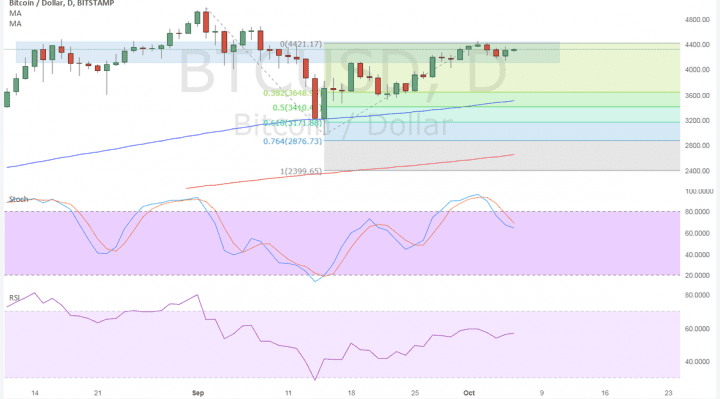 It would take a considerably strong market catalyst to bring bitcoin back up to that level, though, and by the looks of it volumes aren’t strong enough to sustain a test of the record highs, let alone spur a break higher.

The dollar is strongly supported by the idea of tax reform, another Fed interest rate hike, and a potentially less-hawkish Fed Chair next year. However, the upcoming NFP release could still prove to be a make-or-break moment or at least a short-term catalyst since this would strongly influence Fed tightening expectations.

Analysts are expecting to see a gain of 88K, much lower than the earlier 156K figure, but leading indicators have been pointing to an upside surprise. Anything higher than 100K could be bullish for the dollar and therefore bitcoin bearish, especially since the cryptocurrency is being pushed around by negative comments from CEOs of financial firms.