Bitcoin continues in tight consolidation but with a bullish twist, moving inside a rising wedge on its 1-hour time frame. Price is approaching the peak of the pattern to suggest that a breakout is due sooner or later.

The chart pattern spans 2750 to 4500 so the resulting breakout could be of the same size. Resistance is also located at the record highs near 5000 and support could be found at the bottom of the wedge around 3000.

The 100 SMA is crossing above the longer-term 200 SMA to signal that the path of least resistance is to the upside. This means that a break higher might be more likely to happen than a break lower. In the event of a selloff below the wedge support, price could also hit a floor at the moving averages’ dynamic inflection points.

Stochastic is turning lower to reflect the presence of bearish pressure. If the oscillator keeps heading south, bitcoin price could follow suit. RSI is also pointing down to hint that bears are eager to get back in the game. 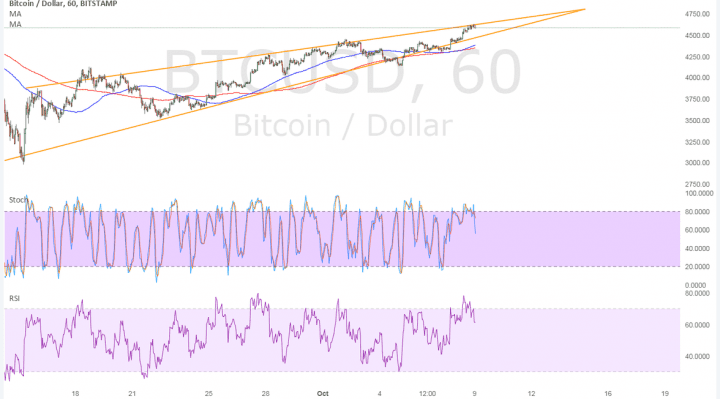 The dollar remains strongly supported while traders continue to expect a Fed interest rate hike in December. While the non-farm payrolls figure printed a surprise 33K drop in hiring versus the estimated 88K gain, the positive revision in the August data reminded dollar bulls that an upgrade is likely in the cards for September as well. Besides, the average hourly earnings report printed a 0.5% gain versus the 0.3% expected increase.

The FOMC minutes are up for release this week, giving traders a better idea of how the December meeting might fare. Recall that this particular announcement was seen as more hawkish than expected as Yellen announced the start of the balance sheet runoff this month and hinted that another tightening move is on the table. Of course there have been the usual slew of cautious remarks from other policymakers but the consensus is still for another hike in December.