Bitcoin finally made a breakout from its consolidation pattern, choosing to take the downside route to confirm that a selloff is in order. Before that happens, though, price might still be able to make a quick correction to the area of interest.

The 100 SMA is below the longer-term 200 SMA so the path of least resistance is to the downside. The gap between the moving averages is also widening to reflect strengthening bearish momentum. In addition, the 100 SMA is close to the area of interest, adding to its strength as a potential ceiling.

Stochastic is heading north for now so bitcoin might follow suit until the oscillator hits the overbought region and turns back down to indicate a return in selling pressure. RSI is just making its way up from the oversold area to show that sellers are taking a break and letting buyers take over. This oscillator has enough room to head higher and keep bullish momentum in play. 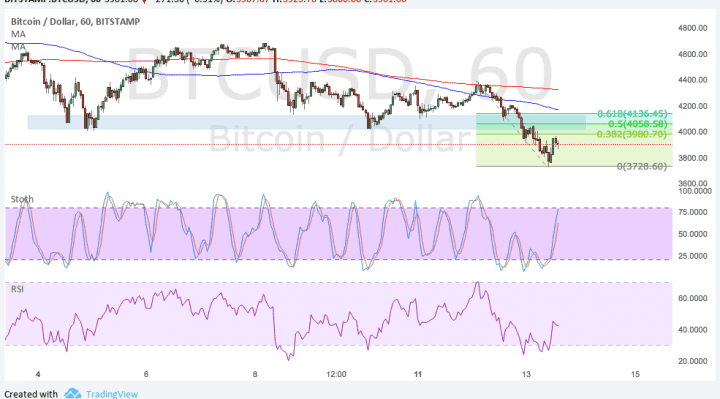 The recent drop is being blamed on JPMorgan CEO Dimon’s comments that bitcoin is a fraud and that its bubble will soon burst. However, it’s also worth noting that the cryptocurrency has managed to stay afloat during the actual time he made those remarks and that bearish moves kicked in a while longer.

Still, it could be a delayed reaction on mainstream markets as bitcoin traders have been sitting on their hands for quite some time and waiting for the next major catalyst. The path of least resistance has already been to the downside coming from China’s ban on ICO funding and rumors that exchanges will be shut down.

At the same time, the dollar is emerging stronger against its peers so far this week, thanks to easing geopolitical risks, renewed focus on tax reform, and upbeat leading inflation indicators.