Bitcoin has recently surged past a short-term descending trend line to indicate that an uptrend may be underway. Price topped out around $4050 and appears ready for a retest of the broken resistance.

The 100 SMA is below the longer-term 200 SMA so the path of least resistance is to the downside. This signals that the selloff could still resume at some point. However, stochastic has been on the move up to indicate the presence of bullish pressure. RSI, on the other hand, is also signaling that sellers are in control of bitcoin price for now. 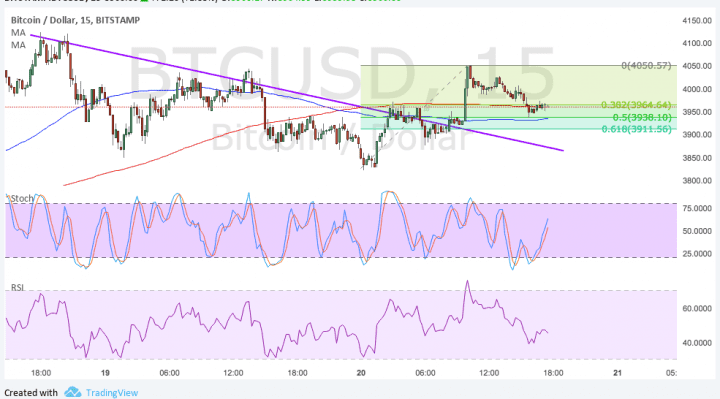 The latest FOMC announcement turned out bullish for the dollar as the Fed kept rates on hold but signaled room to hike in December. They also upgraded growth forecasts for the year, shrugging off the impact of the recent hurricanes as temporary.

Apart from that, Fed head Yellen shared more details on the balance sheet runoff, citing that it will start in October and proceed at a monthly reduction of $10 million in the amount of maturing securities being reinvested. Yellen also highlighted the pickup in exports and business investment but mentioned that the shortfall in inflation remains a mystery.

As for bitcoin, it’s notable how volume has taken a huge hit after China confirmed that it would proceed with shutting down exchanges in the country. Although other major markets like Japan and Hong Kong are likely to shore up their share, activity and volatility could remain subdued for a while.

Besides, there have also been speculations that bitcoin is due for another fork in November, possibly creating a third version of the cryptocurrency. Reviewing the charts on how price reacted to the previous split, however, shows a potential for another leg higher if complications don’t arise.