Bitcoin seems to have completed its long-term pullback to the ascending trend line visible on the daily chart. Applying the Fibonacci extension tool on the correction move shows the next potential resistance levels.

Bitcoin is currently testing the 38.2% extension level around the $4000 major psychological resistance but a continued rally could still last until the 50% extension at $4618 or the 61.8% extension at the swing high. Stronger bullish momentum could take it up to the 76.4% extension near $5000 or all the way up to the full extension at $6179.

The 100 SMA is above the longer-term 200 SMA on this time frame to confirm that the path of least resistance is to the upside. This means that the rally is more likely to continue than to reverse. Also, the 100 SMA dynamic support lines up with the rising trend line, adding to its strength as a floor in the event of another pullback. A larger correction could still draw support from the 200 SMA dynamic inflection point, which is still within the area of interest.

Stochastic is still climbing, which means that bullish pressure is still in play. RSI is also on the move up so bitcoin price could follow suit until both oscillators hit overbought levels and start turning lower. 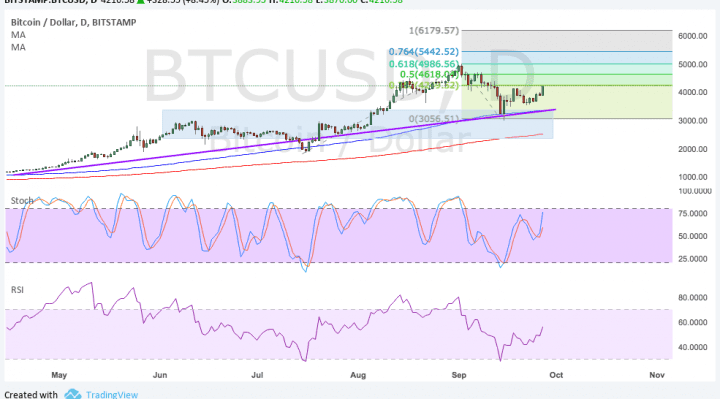 The cryptocurrency drew support today from positive comments from Morgan Stanley CEO James Gorman who said that it is more than just a fad. “The concept of anonymous currency is a very interesting concept – interesting for the privacy protections it gives people, interesting because what it says to the central banking system about controlling that,” he mentioned.

This runs contrary to rival JPMorgan CEO Dimon’s comments on how bitcoin is in a bubble that might burst soon. “It’s obviously highly speculative but it’s not something that’s inherently bad. It’s a natural consequence of the whole blockchain technology,” continued Gorman.

However, the US dollar does have several factors propping it higher as well, including renewed Fed rate hike expectations for December and the stronger push for tax reform by the Trump administration.